Simplot is suffering a community backlash over its callous dismissal of workers without warning as more than 120 people turned out on Wednesday evening for a protest rally and barbecue outside its Ulverstone factory and offices.

Workers, family members and unionists from across northern Tasmania held placards condemning the management for betraying all trust in job negotiations with the AMWU by ruthlessly dismissing  six workers on the spot last Friday and another on Saturday.

The dismissed workers were heartened by the big turnout to support them, which included employees from Simplot’s Devonport site and members of eight other unions.

Passion for decency: a section of the crowd which protested outside Simplot in Ulverstone.

AMWU delegate Jason Martin was among sacked workers who had been at Simplot for about 25 years.

Mr Martin told AMWU News he had tried to consult with management  over rumoured action about people being made redundant but was told nothing had been decided. Then he was among those sacked.

“I’ve got four kids, a mortgage and a car payment and we’re all trying to survive – this is just blatantly wrong.”

AMWU Tasmanian Secretary John Short said the company had suddenly acted without consultation despite months of ongoing, detailed discussions with the union to work out an orderly  process for 10 planned redundancies.

Six workers were told by managers who arrived at the potato processing plant at a 6 a.m. shift changeover last Friday morning that they were instantly being made “redundant,” with a boss watching each clean out their lockers and escorting them off the premises.

Another worker was terminated on Saturday, with total dismissals expected to be 12 even though the company has recently advertised for casual employees and has already employed some.

“That’s very strange when they’re making workers 'redundant'…we know they need casual workers but there should be no need to get rid of permanent workers,” Mr Short said.

Only a few of the workers – most with over 25 years experience - had expressed an interest in taking redundancy. 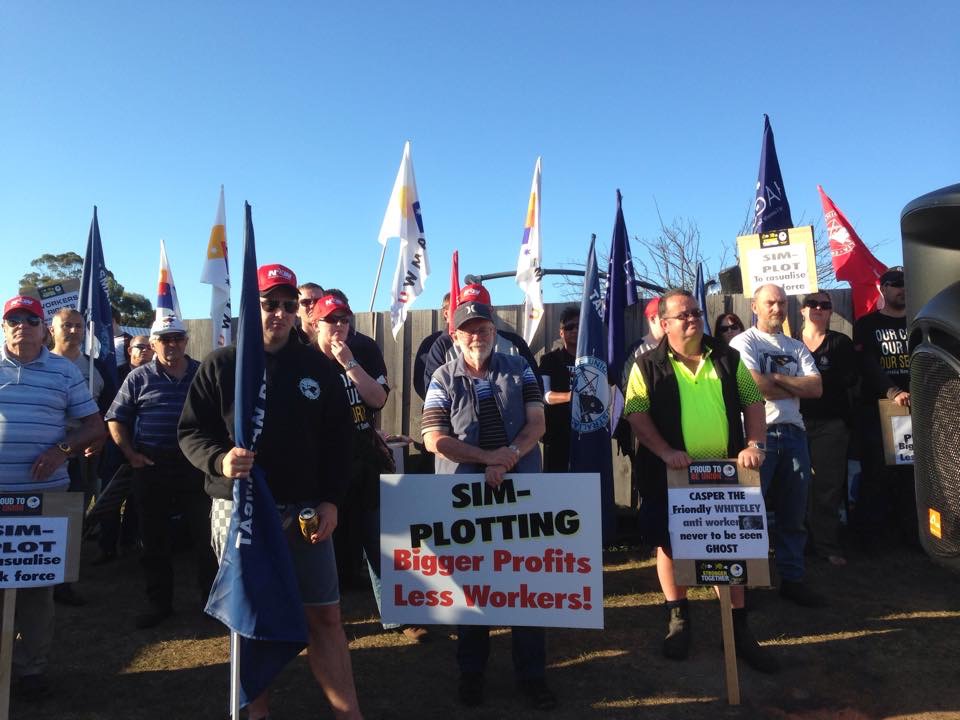 Tasmanian Senator Anne Urquhart told the protest she was sick of seeing companies disregard the communities they rely on and called on Simplot to consider the impact of its actions.

She said had started work at Simplot in 1979 and knew some of those people made redundant, who were trustworthy, hard workers.

“What Simplot have done seems to me unfair and targeted at individuals rather than a proper process,” Senator Urquhart said.

The AMWU is carefully exploring  legal options to assist our dismissed members.