Beer production in Melbourne was totally halted yesterday (Thursday) for the first time in the 11 weeks of the CUB dispute when brewery crews stopped work for a legal, three hour meeting and supported our sacked AMWU maintenance members.

And the impact as production operators walked out the brewery gates might only get worse for CUB, with them voting to consider escalated action if management don’t re-employ our  55 AMWU and ETU members on  restored pay and conditions.

Over 120 members of the CFMEU and United Voice working under enormous pressure received a heroes’ welcome from the 55 and scores of cheering supporters when they decided at their authorised stopwork meeting outside to go outside in solidarity. 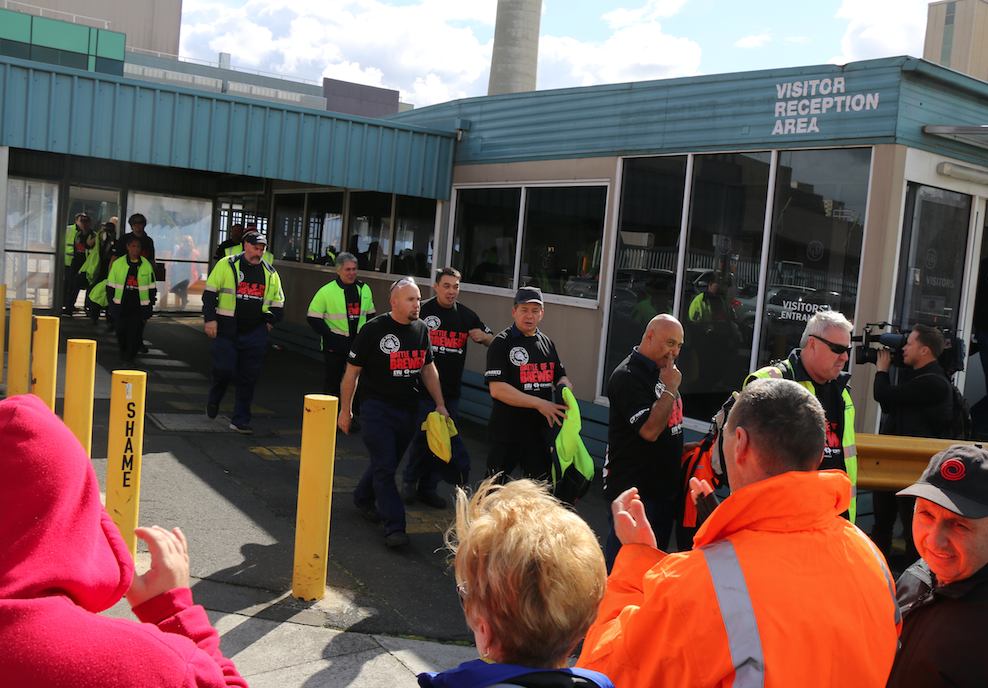 Heroes welcome: AMWU supporters clap as the CFMEU and United Voice members walk out the brewery gate to join them.

They had just voted to call on CUB to intervene with its maintenance contractor Programmed and to direct that company to offer jobs to the 55 members on the same conditions they had under previous contractor Quant.

If CUB won’t move, then the CFMEU and UV members will consult over escalated action, likely to throw beer production - already down by two thirds - into total crisis. That would likely leave retailers dry for the peak time of Spring-Summer demand.

AMWU Assistant Victorian Secretary Craig Kelly told the rally it was a proud sight for everyone as the production workers marched through the gates to the strains of bagpipes.

“That’s something you’ll never forget, it’s a great day with the stopping of production,” he said.

Mr Kelly spoke of the impact of five apprentices of having their time cut short, urging all AMWU members nationally to keep donating so the effort can go on.

United Voice State secretary Jess Walsh took to the scaffolding stage making up the unions “tower of power” to warn CUB that production and distribution members would consider  further stopwork meetings over September-December.

She said this was “very serious” for CUB during football finals time.

“We’re going to stand up, unite keep speaking out and make sure CUB remains a united union site for 100 years to come.”

Earlier ACTU President Ged Kearney told rpotesters that unions were at the top of a cliff with CUB leading employers and the Turnbull Government in trying to push workers off into an abyss of low-paid, labour hire.

“The only ones going off that cliff at the end of the day are the bosses, not the workers and unions who’ve drawn a line in the sand,” she said.

“We know them, they stop by the chat on their way to work. Now to see them come out and show they’re 100 per cent behind us shows they understand what we are fighting for – not just ourselves but the conditions of everyone inside CUB,” he said. 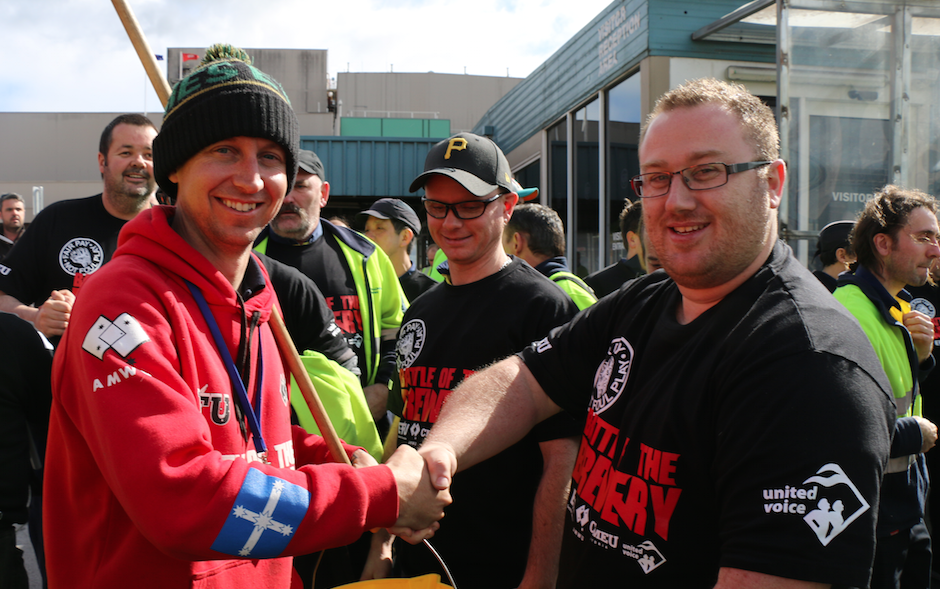 Great to see you: AMWU member Chris Brown, one of the 55, greets one of his fellow brewery mates who had a stop-work meeting for the afternoon.