Auto techs tune up in Geelong

Our AutoWorkers Australia campaign to help auto technicians improve their work conditions and career prospects pulled up in the car city of Geelong recently for a relaxed evening of networking and info sharing.

About a dozen auto technicians took up our facebook invite to the Barwon Club Hotel to meet our Victorian project team of John Herbertson, Dylan Wight and Jarrod Allen over a feed and a few drinks.

John gave an outline of our efforts to assist auto techs in dozens of shops in the wider Geelong area, some where we’ve had membership in previous years.

People also swapped a few stories, jokes and compared conditions with auto techs in other Geelong shops, including the big auto dealerships of Rex Gorell and Blood Motor Group.

It followed a series of visits to many local Geelong shops by the team in previous weeks, where they outlined how AutoWorkers Australia could assist in ensuring auto techs receive all their proper entitlements over pay, conditions and workplace safety. 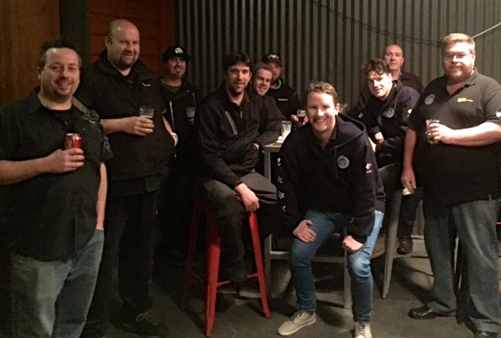 Tech talk: our Autoworkers Australia crew with some of the auto techs on the evening.

Dylan Wight said it was an enjoyable and useful evening, with techs raising issues including unpaid overtime and vicarious liability, where they might be expected by their employer to pay for accidental damage to a vehicle they had worked on.

A half dozen of the auto technicians also decided to join Autoworkers Australia, which has held similar evenings  in Adelaide and Tasmania.

Paul Bond, who works at Blood Motor Group, said he had enjoyed meeting our crew and also chatting with auto techs from other companies.

“It was good to make some new contacts, we caught up and talked about our own workplaces but also the wider challenges for us all in the industry,” he said.

“I think the pay level for mechanics is always an issue, we seem to be one of the lower-paid of all the trades and we have to talk about how to improve that.”

Paul said it would be worthwhile having regular social get togethers.

Dylan Wight said: “It was pretty casual, some of the guys hadn’t had the chance before to meet others who worked in the same industry in Geelong and they found they had a lot of issues in common.

“It’s really about having their skills properly respected, raising their pay scales so their training and their expertise are fairly recognised.

“The work these guys do makes your family car safe to travel in – it’s a big responsibility.”