Young workers in the auto industry face a bleak future after the Federal Government announced it would extend $4 an hour internships to the auto trades.

Bringing the PaTH (prepare- trial- hire) intern scheme to auto shops opens the way for unemployed people aged under 25 to be used up by unscrupulous  employers to replace  low-paid award jobs – apprentices but also car cleaners and detailers.

Under the scheme, the Turnbull Government will join with the Motor Traders Association of Australia (MTAA) to pay auto shop owners a taxpayer subsidy of $1000 to “train” then “trial” interns over 18 weeks at almost no wage expense.

AMWU National Vehicles Secretary Dave Smith condemned the PaTH concept as “perverse” in offering the young unemployed false hope while making it tougher for thousands of skilled workers about to enter the jobs market from the car-makers and parts supply chain.

Employment Minister Michaelia Cash is happy the MTAA wants to get its hands on 1000 interns a year to supply to its member shops, paid $100 a week (or $4 per hour for a 25-hour week) on top of the dole.

That’s a wage nearly $60 below the individual poverty line. 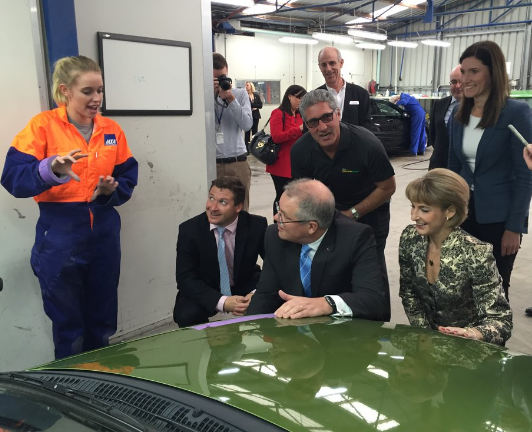 Trouble under the bonnet: Coalition ministers Scott Morrison and Michaelia Cash set foot in an Adelaide auto workshop this week to explain they were making $4 per hour interns available to employers.

Mr Smith said:  “This is cheap labour to be exploited – it’s inevitable some employers will cut back on full-paid employees then get the most menial, dirtiest tasks done by a churning flow of young interns who would each be turfed after their subsidy ran out.

“Why pay and train an apprentice to do basic tasks in their first-year when you can get a subsidised intern? Why pay a car cleaner or detailer a $17 award rate when you can get an intern for virtually nothing? That would be the logic of many unscrupulous bosses.”

Interns could be used during their six weeks training plus a 12-week “trial” to free-up auto technicians from the most basic car servicing tasks – such as checking brakes and oil changes.

“In SA there is no formal qualification required to work servicing cars – would you want an inexperienced intern replacing the brake pads on your family car?” he asked. “Would you trust their work was properly checked by a qualified auto technician? Would you be told?”

He said claims by the Motor Traders Association of Australia of a 16,000-job shortage that interns could help fill was a furphy, when the industry faced tens of thousands of job losses.

In South Australia there was already a substantial waiting list for trainees from the Association to be placed with employers.