The AMWU is set to take a leading union role in a global campaign over coming weeks to put an end to the trade in deadly white asbestos. 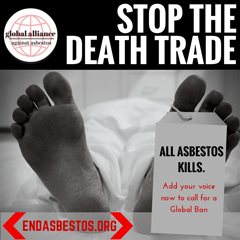 AMWU National President Andrew Dettmer will co-lead unions in a protest  to      publicly name and shame  nations leading the trade in death during a key United  Nations meeting in May.

“You expose us, we’ll expose you” is the warning to rogue companies and  countries by The Global Alliance Aginast Asbestos (www.endasbestos.org/)  of  unions and victims groups.

Russia, Brazil and Kazakhstan are being targeted because they continue to mine,  export and use chrysotile (white) asbestos without limit, mainly through trade in  cheap building materials.

The 700 Australian deaths every year from mesothelioma and other appalling  asbestos-related diseases are among 100,000 fatalities worldwide, particularly in  developing countries.

These three nations and India are the only countries blocking effective  restrictions on the trade in chrysotile asbestos and are fighting hard to stop it  being added to substances listed under the Rotterdam Convention, the UN’s  global treaty on hazardous chemicals.

Union campaigning has helped prompt Vietnam to phase in a ban on use of asbestos in manufacturing by 2020. It will also vote to list chrysotile under the Convention.

Rotterdam Convention members are meeting in Geneva in mid-may to update the treaty.

Chrysoltile asbestos is not listed as a hazardous substance, but the union wants this to change.

“Listing chrysotile asbestos in the Convention requires every nation to agree, so these four nations must be held accountable for their veto, which is destroying thousands of lives ,” Mr Dettmer said.

“This is a typical example of an industry protecting its markets without regard for the human consequences,” said the former ACTU president.

“Global asbestos production is not falling and in some countries, including India, Indonesia, Brazil, consumption has increased.”