Another Win for All Trades Apprentices! 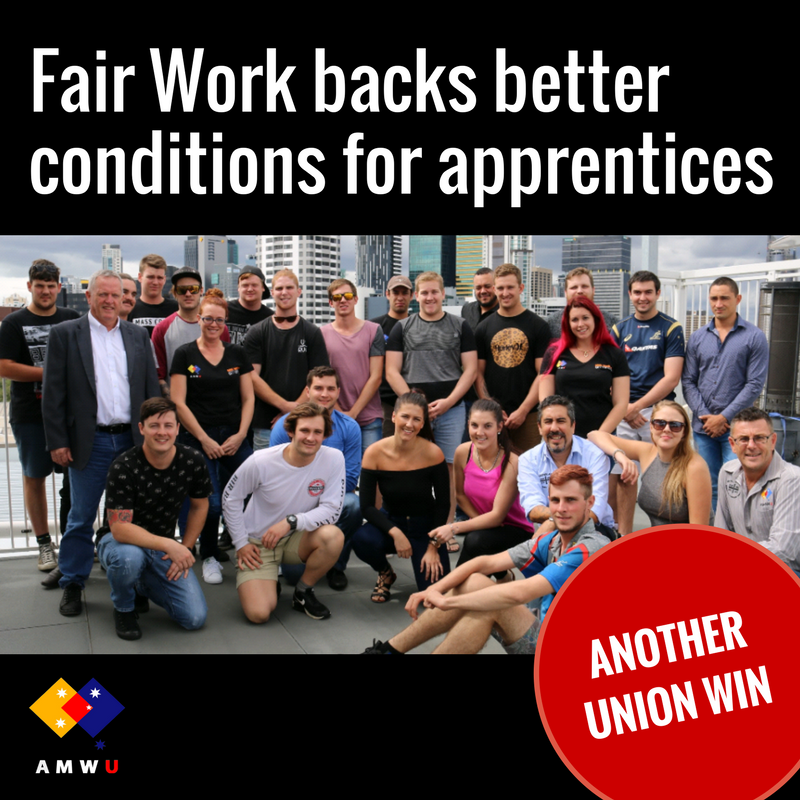 Yesterday, on 7 February 2017, All Trades Queensland Apprentices had another huge win for their wages and conditions!

Last year your Union, along with other building and construction unions, won an important legal battle over the minimum rates of pay and conditions for ATQ apprentices.

The AMWU, along with the ETU, CFMEU and Plumbers Union fought for ATQ apprentices by opposing the approval of the ATQ agreement on the basis that ATQ argued the proposed agreement was underpinned by old and outdated State Awards.

The appeal was heard before a Full Bench of FWC late last year. Yesterday, the Full Bench released its decision, which backed our argument that modern awards provide the minimum wages and conditions for ATQ apprentices.

The appeal confirms the decision from last year and means that apprentices will get a better deal.

AMWU Queensland and Northern Territory Secretary said, "This decision is a huge win not only for ATQ apprentices but also more broadly for Queensland apprentices engaged by group training organisations."

The Agreement has now been referred back to the FWC for the ATQ agreement to be assessed against the relevant modern awards, including the modern manufacturing award.

The AMWU will continue to fight hard to ensure ATQ apprentices are provided with decent pay and conditions. On top of this, we’ll be exploring the legal options for ATQ apprentices and other apprentices engaged by GTOs, in respect of wages and entitlements that may be owed due to the dodgy industry practice of applying old and outdated State Awards.

We congratulate apprentices on this wonderful victory. For more information on this matter, please contact Ricky Luke at [email protected]. Or to read the full decision, click here.