The Australian Manufacturing Workers’ Union’s Western Australian Branch has thrown its full support behind MATES in Construction, the national not-for-profit group working towards ending suicide in the construction industry.

State Secretary Steve McCartney said the union was doing everything it could industrially and politically to improve workplace mental health and wellbeing and this was yet another initiative.

“We’ve been working on long-term solutions for workplace mental health and wellbeing issues through Parliament and in industrial bargaining, but this is a way to complement that with positive action right now,” he said.

“We have thousands of members in engineering and construction and have worked with MATES in Construction for years. We know the great work they do and we are very pleased to support them. This is another important step in support of our members.”

WA Mates in Construction CEO Godfrey Baronie said having the AMWU on board meant MIC would be able to expand its services and help more people.

“We are really pleased the AMWU has partnered with us because it means we’ll now be helping even more workers and their families. It’s really pleasing to know more people will have access to a program we know works,” he said. 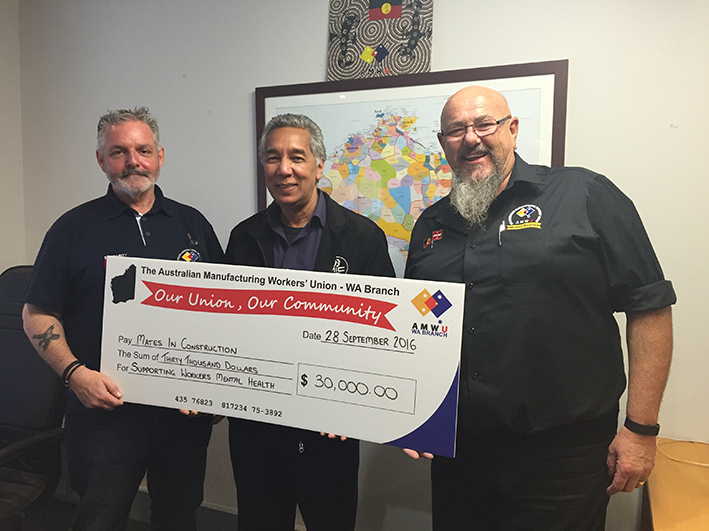 MIC’s approach differs to other providers in that it is based first and foremost on teaching the skills and techniques to empower workers to look after each other.

Behind this thinking is the idea that improving mental health and wellbeing and reducing suicide cannot be simply left to the mental health professionals and everyone in the industry can play a part.

Mr Baronie said MATES in Construction’s independence is taken extremely seriously and has been critical to achieving high levels of trust and confidence among the workers and their families.

“We are not beholden to anyone. Employees feel confident that they can share information with us and it won’t be shared with anyone else,” he said.

Mr McCartney said this was a critical factor in the AMWU’s partnership with MIC.

“Genuine peer-to-peer support is so important in this kind of industry. There is a level of trust between workmates that just doesn’t exist with company provided services,” he said.

Giving members the confidence and skills to help each other

“When we surveyed our members last year, 57 per cent of respondents said they felt a lack of training was hampering their ability to assist if a workmate asked for help. More than 30 per cent said fear of creating issues with management was also an issue.”

“We see this partnership as a way of empowering our own members to look after each other in what sadly remains an industry which has very high rates of suicide and mental distress.”

The decision to direct union resources to MIC followed a decision of the AMWU’s March State Conference, which unanimously endorsed a motion from Delegate Jon Primrose to support the organisation.

As a Tier 1 partner, the WA Branch will contribute $30,000 per year towards the MIC program.

Doing It Tough? If you’re ever in need of assistance the MIC national helpline is 1300 642 111. Alternatively look out for mates in your team with MIC stickers on their helmets.