Our Union congratulates Bill Ridley, our newest Life Member after 60 years and counting as a proud unionist. This is his story.

My story begins midyear in 1941 while at a Government school in Midland Western Australia. I applied for an apprenticeship but was not selected. At the end of 1941 I left school but enrolled three nights a week (6-8pm) at a Technical School for Maths and Drawing.

My first job was March 1942 (bottom rung of the ladder of becoming a steam locomotive driver, which would take 20 years). My classification was “call boy” and the job was to go from home to home to wake up drivers & firemen for duty. I soon found out working shifts of 2am, Sam, 4pm and 1 l.30pm was a big change in my life.

I applied every year for an apprenticeship and in 1943 was selected as a boilermaker apprentice, to commence the following year. On the tenth of July 1944 I commenced that five year term, along with night school and day studies kept me busy. I also joined the Railways First Aid classes and was part of the Railways First Aid team that competed Australia wide against over Railway teams for many years.

In every section where I worked, the shop stewards always checked on a regular basis to see if I was OK and from this I gained real confidence and felt that I was not a loner or could be harassed.

At the age of 19 and in my 3rd year of apprenticeship, I joined the Union ­ Boilermakers and Blacksmiths’ Society on November 1 1947.

The Second World War was on and clothing coupons were needed but working clothes were still hard to get. I obtained a pair of red/burgundy colour “prisoner of war” pants and naturally I stood out. My Foreman blew his top and thought for a while that I had escaped from the prisoner of war camp. He told me to take them off, so I did in front of him and stood there with only shirt and jocks on. He smartly told me “don’t be funny” and took off. I was the talk of about 2000 men.

Then I got hold of a pair of white American bell bottom sailor pants and wore them - so I was a real noticeable person and hence became known and called “Sailor Bill”. The shop stewards said “boy, you have some grunt”.

In my fifth and final year I attended school just for boilermakers (1 day a fortnight) and was named apprentice of the year and given a steel spirit level which I still have. I think it was donated by the Union, that was in 1949.

At Easter 1952 the boilermaker unionists at the Midland Railway Workshops where I worked went on strike for 6 months and only returned to work a couple of weeks before my marriage on 18th October 1952 - so I know of hardship. 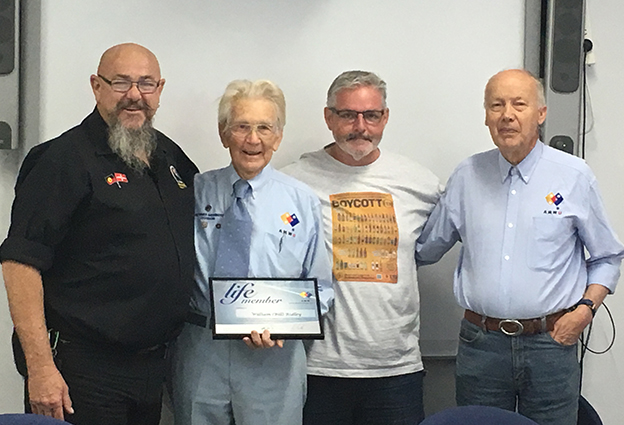 I have always fought for my rights. I was suspended for refusing to work on jobs that were classified at a higher rate of pay and the Railways not wanting to pay. The Union won the case.

I refused to sign a form to have my pay paid to a bank account. I was the last person at these big workshops of some 2500 men to be paid in cash. The Union and myself went to a court hearing and the result was “to go away and both parties come to an agreement”. This took months - the Railways opened up a bank account but I would not give them my signature to withdraw money, so the account was frozen and the money returned to the Government Railways (around five weeks pay). I finally conceded, with regret.

I was encouraged to become a shop steward and this I did for around four years (1976-1980) representing the boilermakers in the fitting shop at Midland Railway workshops. I had already been to shop steward classes and had many a confrontation with the bosses.

I retired from the work force in April 1988 and then joined the Retired Members Association. I became the Secretary/Treasurer of the RMA from 1991 to December 2007 (16 years). I have been a delegate to the RMA biannual National Conference since 1990. I am currently the Western Australian State Returning Officer and have been since May 1992.

Now, at the age of 80 and being a unionist for some 60 years, I feel it’s time to relax a little. My past has allowed me to meet many of our members’ and I hope give some very useful advice. On one occasion when in Sydney went to Botany with the Sydney RMA delegation and addressed the many MUA strikers during the Patrick Dispute in 1998.

I am saddened as my mate Ray Engent (a real unionist of Sydney) passed away in November 2007. I met Ray at a conference in 1990, and remained very close friends right up to his death. He gave me great advice on being a Secretary/Treasurer of our great Retired Members Division, and was an inspiration to me.

I will continue attending the RMD monthly meetings in Perth.