During 8 months of bargaining the company pushed to strip allowances including travel, which make up 20 per cent of members’ wages. To make matters worse, the company also offered a below inflation pay increase, meaning a real step backward in living standards for our members and their families.

In response, members voted to take protected industrial action in the form of a six hour strike in mid- August before the company retaliated by locking them out for 24. However, the result was that both parties agreed to resume bargaining to end the stalemate. 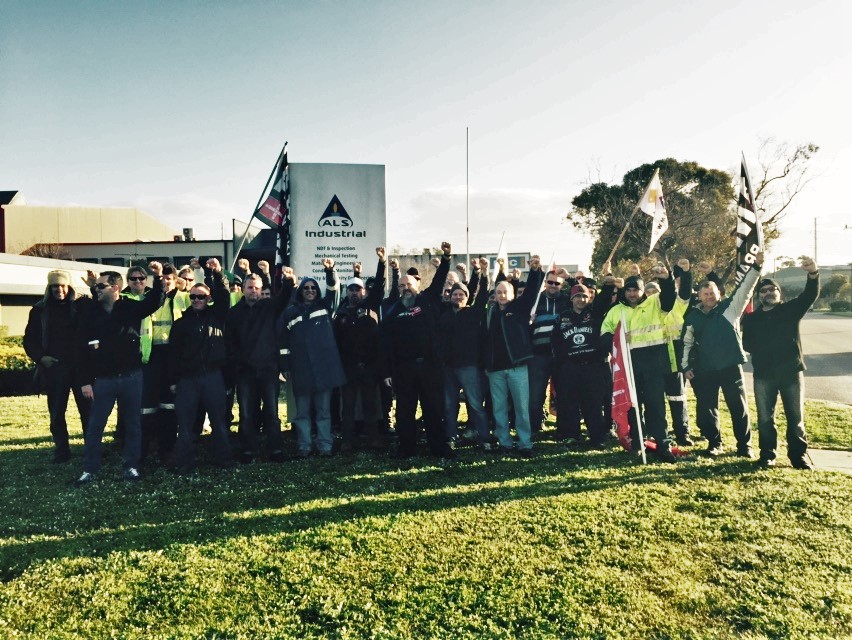 DETERMINED: ALS AMWU members on the picket line on the road to their new agreement with State Secretary Steve McCartney

After being forced back to the bargaining table, ALS improved their offer to an above CPI wage rise and retention of allowances, giving our members what they needed to accept the offer.

The agreement was voted up with 79 per cent in favour on September 12.

State Secretary Steve McCartney, who visited the picket line during the strike, said companies were looking for easy targets in the wake of WA economic downturn.

“In these tough economic times, highly paid CEOs are trying to cut back wherever they can as long as it’s not their overinflated salaries. Without a union, workers’ wages are easy targets.”

“I congratulate AMWU members at ALS for sticking together and sticking up for their rights and conditions. You never know what the boss’s best offer is until you stand up.”

IF YOU DON'T FIGHT YOU LOSE. Sign up to join the AMWU and get a better deal at your workplace too.