Hundreds of AMWU tradespeople gathered at Pinjarra Oval to discuss the offer before unanimously endorsing a resolution to reject the global multinational’s proposal which would outsource permanent jobs and undermine economic security for hundreds of local families.

The company’s proposed maintenance agreement contains provisions to not only cut 160 jobs but also enable the company to outsource a further 400 over the three-year duration of the agreement, which goes to ballot later this month.

The news of the proposal has outraged and frightened hundreds of working families in the South metro and the South-West communities of WA, who rely on the stability and continuity of direct employment.

Operations workers have already lost $30,000 per year over a recent restructure approved by the Fair Work Commission in an arbitrated dispute.

AMWU State Secretary Steve McCartney, who addressed the meeting, condemned the offer but maintained members are committed to reaching an in-principle agreement. 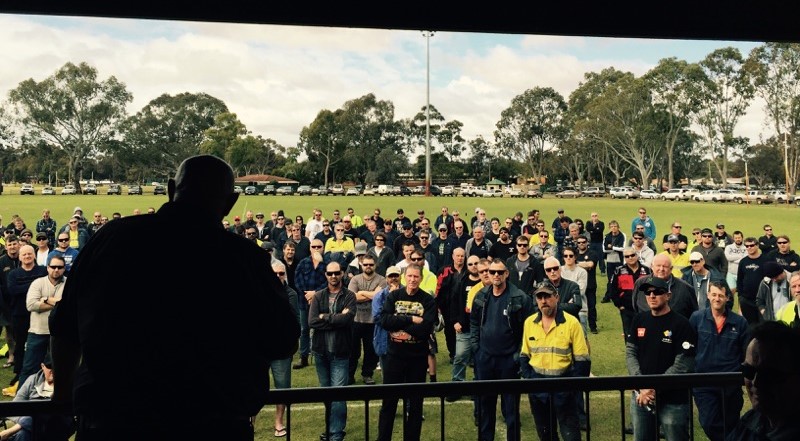 “Alcoa is asking our members to vote to approve the outsourcing of their own jobs. That’s frankly a ridiculous proposal and I support our members’ decision to reject it 100 per cent.”

“Our members are experienced, highly skilled and help make Alcoa’s South-West alumina and bauxite operations the most efficient and profitable in the world.”

“On one hand Alcoa likes to promote itself as a model corporate citizen, on the other it’s trying to rip away economic stability for the communities where they operate.”

“Like we have seen in the Carlton United Breweries dispute in Victoria, this is the latest front in an epidemic of aggressive outsourcing and a race to the bottom in contracting to push down wages and conditions for working families.”

Alcoa World and Chemicals (AWAC), which runs all Alcoa branded bauxite mining and alumina refineries in Australia, is owned by Australian partner Alumina (40 per cent) and American company Alcoa (60 per cent). Last year AWAC made a profit of $US88.3 million.

Despite the healthy profits, Alcoa World has recently engaged in an aggressive cost-cutting strategy even though Alumina Chief Executive Peter Wasow admitted “labour's a pretty small component of the overall total costs” earlier this year.