The AMWU is among unions which have agreed to step up their fightback for fairness by building the ACTU into a campaigning machine to defeat the anti-worker agenda of conservative governments Australia-wide.

The ACTU’s new Build A Better Future campaign will first put 21 full-time activists to work targeting  the Abbott Government in marginal seats, as it builds momentum greater than the 2007 anti-WorkChoices effort.

The action plan to fight inequality was launched at the ACTU Congress and it will draw on resources of 1.8 million unionists in elections at all levels over the next three years.

But Build A Better Future also reaches far beyond federal or state elections, aiming to build up an adaptable, specialist team of campaigners which can be swung into any union’s effort, on issues ranging from penalty rates to temporary visas, local content in manufacturing  or protecting the minimum wage.

ACTU Secretary Dave Oliver said the Abbott Government had deepened inequality in Australia so it was now the 11th worst of 34 developed nations. 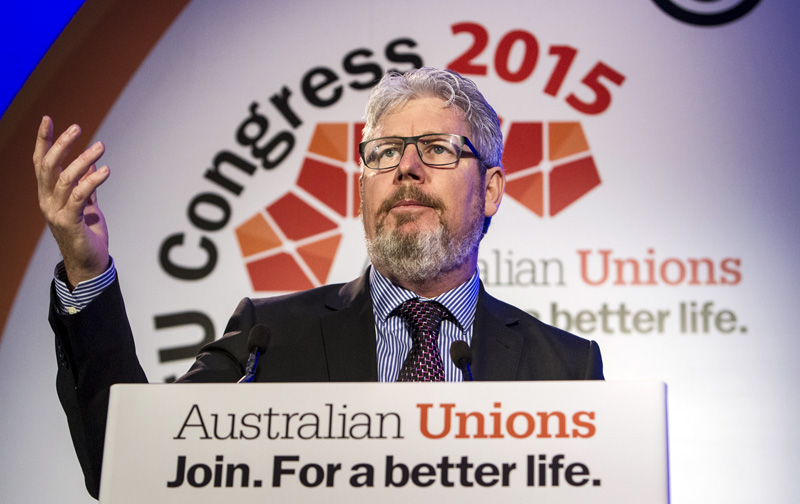 “As I travel the country and talk to workers they tell me they’re  worried about the future of their job security, attacks on living  standards, attacks on wages and conditions,” he said.

“In this country we have a government fostering inequality,  taking a wrecking ball to the social wage.”

A Productivity Commission inquiry was the “Trojan horse’’ to  dismantle penalty rates, the minimum wage and unions role in  the industrial system under a re-elected Abbott Government.

“I’ve got bad news for you Tony (Abbott), because we’ll do it again.”

ACTU Congress approved the $13 million strategic Build A Better Future plan with no votes against, delegates convinced the extra $2 affiliation fee per union members would be money well spent for the future.

Over 52,000 unionists in a massive nationwide survey last year revealed their fears that future generations would not be able to get a good job, afford a home, access tertiary education or get proper health care.

ACTU President Ged Kearney said it was a warning against emergence of an American-style underclass of working poor in Australia.

The new campaigning staff would be an adaptable resource available to affiliate unions to help in specific “blitz” industrial or community campaigns.

Expanding use of social media would be key to backing up face to face campaigning and that would be aided by  developing a vast national data base, starting from existing union information..

Mr Oliver said: “We all know that data is gold and we want union data systems that will talk to one another. Ultimately we want a union-wide database.”

The data banks used in elections would be grown, combined with union systems and updated to be comprehensive, accurate, flexible tools.

ACTU Congress joined 300 workplaces across the nation in endorsing a new union vision, the six-point basis of Build A Better Future comprising:

Ged Kearney said these pillars of our living standards were demands the union movement put on all governments.

“It seems to us there is a huge disconnect between what we are told by polticians in Canberra and by the nation’s business elite, and what is the real life working experience of working people,” she said.