Prime Minister Tony Abbott has failed to face up to protesting Forgacs shipbuilders during a visit to the NSW Hunter region, where workers are already losing jobs.

Mr Abbott opted to fly into RAAF Williamtown to announce a $274 million upgrade to the base, the week after Forgacs said it would lose 160 jobs due to lack of any new work.

Then he sneaked out a side exit gate to avoid fronting those workers and trying to justify to them his Government depriving the naval shipbuilding industry of new work.

“He didn’t want to face up to the fact that his government's inaction looks like costing us our jobs,” said AMWU Forgacs delegate Ben Horan.

“A lot of people at work have been anxious about their future, about their families, and that sadness and anger came out today.” 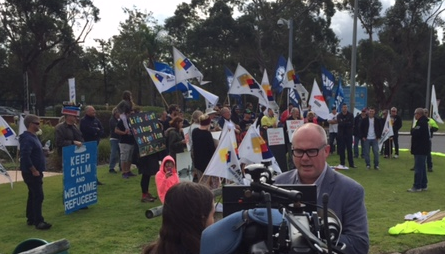 The Abbott snub came the same day as the final Senate report into the industry condemned his Government’s exclusion of local defence firms for two supply ship contracts and its loaded process to select an overseas builder for the future submarines.

The Senate Committee urged the Government to go back to the drawing board on navy ships procurement in a last-minute effort to stop the industry sinking into the “Valley of Death.”

It recommended the Government urgently re-open the tender for the two supply ships to include local shipbuilders; that 12 future submarines should be built and maintained in Australia; that the Pacific Patrol Boats program be fast tracked; and that the building of the future frigates be brought forward.

The Forgacs protesters agreed that this was the only way to give hope to the 160 workers whose jobs are due to be lost and the 350 remaining under threat, and to also give a fair chance to BAE workers at Melbourne’s Williamstown dockyards.

AMWU members were joined by Maritime Union comrades in warning that Tony Abbott would never again be welcome in the Hunter until he took responsibility as PM to relieve the 10.9% Hunter unemployment.

NSW State secretary Tim Ayres told them: “If the PM wants to make a difference, he can bring forward planned navy procurement contracts that could save jobs.

“Until then, he shouldn’t bother visiting the region.”

The Senate Committee said of the Government:  “…it is unacceptable for the sole customer to criticise the industry for poor performance when many of the problems originate from a lack of Government foresight.”

AMWU National secretary Glenn Thompson said: “Time is running out and unless this Government comes to its senses, shipbuilding will be headed in the same direction as the car industry.”