A marriage made in Plant One

When Doreen Ali went to work at Ford she expected to have a hand in building new Falcons but learning to talk the car industry torque meant she came off the line with a new husband.

For well over 20 years Doreen and Dominic Cidoni have shared their lives with their Ford workmates, driving to the factory together every morning in a car made right there.

Now the place their romance blossomed will soon be no longer but at least they know on the last day at Ford Broadmeadows they’ll go home together. 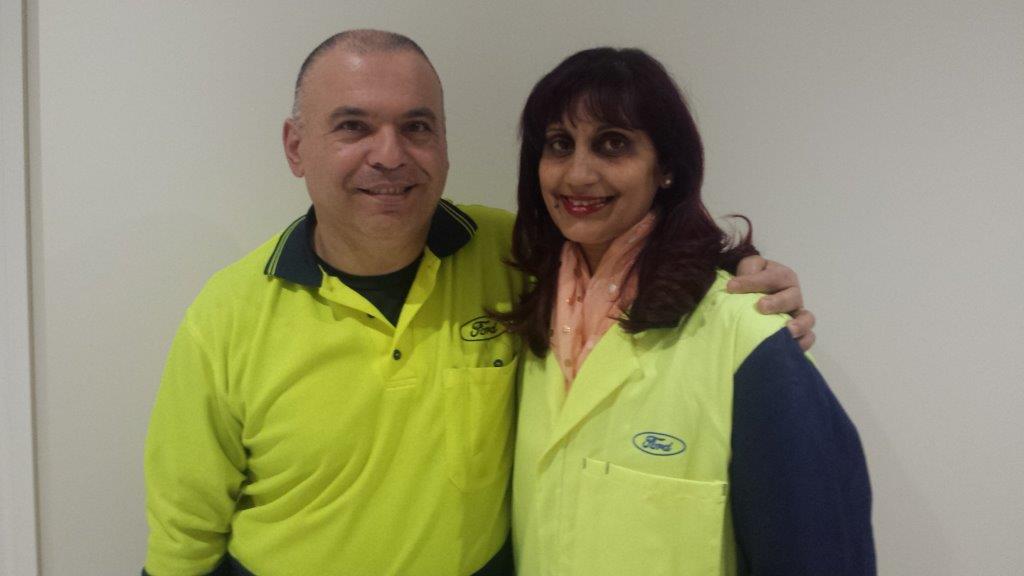 Going forward together: Dominic and Doreen.

“It’s sad, but the union and Ford have been very helpful to everyone, they’ve brought a lot of people in to talk about other jobs, they’ve given us time for training, so no one can complain,” Doreen said.

“It’s the people I’ll miss, my workmates, the other shop stewards, the supervisors – a lot of my best friends are there.”

She was in her mid-20s when she started.

“I was on the trim line, Dominic was a torque inspector checking the guns fixing the child restraints (and anchor points). We got talking, were good friends, then connected,” she said.

In the past three years Doreen was a shop steward in final production, working in vehicle water testing.

But having used the re-training available to gain a diploma in childcare, plus pathology collection and warehouse, Doreen is hopeful she’ll be soon making new friends in a new work life.

Dominic said it will be strange at first, but he’s also picked up skills in warehousing, forklift and truck driving - even railway signaling.

“It’s never going to be the same again for us, we go to work together and spend a lot of time together. There’s pride at Ford, you’re making something useful. Not many people can say that they are driving their job.”

In recent years they've been able to take a brand new Ford, a Territory or Falcon, to drive home for road testing as part of the job.

That ends today but they know their life's journey will continue together, their marriage made in plant one in Broadmeadows.