AMWU members are celebrating after our campaign in the lead up to the Victorian election paid off with $2 billion allocated for the rail industry in the recent State Budget.

The AMWU has called on all state governments to seize the huge opportunity flowing from this historic investment to kick-start an integrated national rail industry.

The Victorian Government has pledged 100 new trains and 240 new trams will be made in Victroia over the next decade - and at least half the content must come from Australian suppliers.

The money in this first Labor Government Budget will fund manufacture of the first 83 of the new trains and trams.

A shot in the arm for jobs, it should support work in rail shops for decades to come. 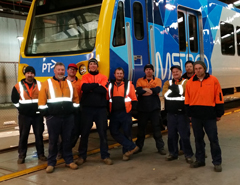 Victorian Secretary Steve Dargavel said it was the biggest rail build in Victorian history, and a huge win for members.

“Members campaigned relentlessly for local procurement and local jobs before last year’s state election, and this is their victory,” he said.

Victoria’s investment in the rail industry now gives other states a unique opportunity to create a critical mass of projects which could secure the future of thousands of jobs – both directly and down the supply chain.

“We now urge other State Governments to commit to a local build of their upcoming train projects, which could give suppliers across the country the critical mass of rolling orders to set them up for decades to come.”

New maintenance depots near Geelong will create 130 jobs, with the AMWU estimating a further two depots will be required for the new fleets.

“This is the opportunity our members campaigned for and deserve,” said Steve Dargavel.

“UGL, Alstom and Downer can build high-quality trains and the 50 per cent local content is a base for expanding to build carriage bodies and bogies here rather than flat-packing those in from overseas.

“What’s also heartening is a commitment from the Labor Government to develop TAFE programs for new apprentices and also to train new engineers which are essential to grow the industry as our existing workforce is ageing.”