The AMWU has welcomed the new $58 million election commitment by the Labor Party to help firms in auto components and general industry successfully make the transition to advanced manufacturing.

The policy unveiled by Opposition Leader Bill Shorten on a visit to an AMWU shop showed that one side of politics is serious in providing investment incentives for firms to break into new markets, which pleased our members he met at Backwell IXL in Geelong.

The Manufacturing Transition Boost is intended to enhance existing state programs, particularly in  Victoria and South Australia where many of the 45,000 workers in the auto component manufacturing face uncertain futures.

AMWU National Secretary Paul Bastian said it was heartening that the alternative government was planning to assist State Governments to pick up the pieces left by the Coalition’s abandonment  of car making in Australia.

“Malcolm Turnbull was in Cabinet supporting Tony Abbott and Joe Hockey when they decided to dump car manufacturing in this country,” he said.

“Manufacturing has been all but ignored by the Coalition – we’ve heard a lot of talk from Mr Turnbull about innovation and new opportunities in the emerging global economy, but the time for talk is over.

“If it takes Labor to recognise the importance of kick-starting manufacturing in Victoria and South Australia, our members would welcome that.” 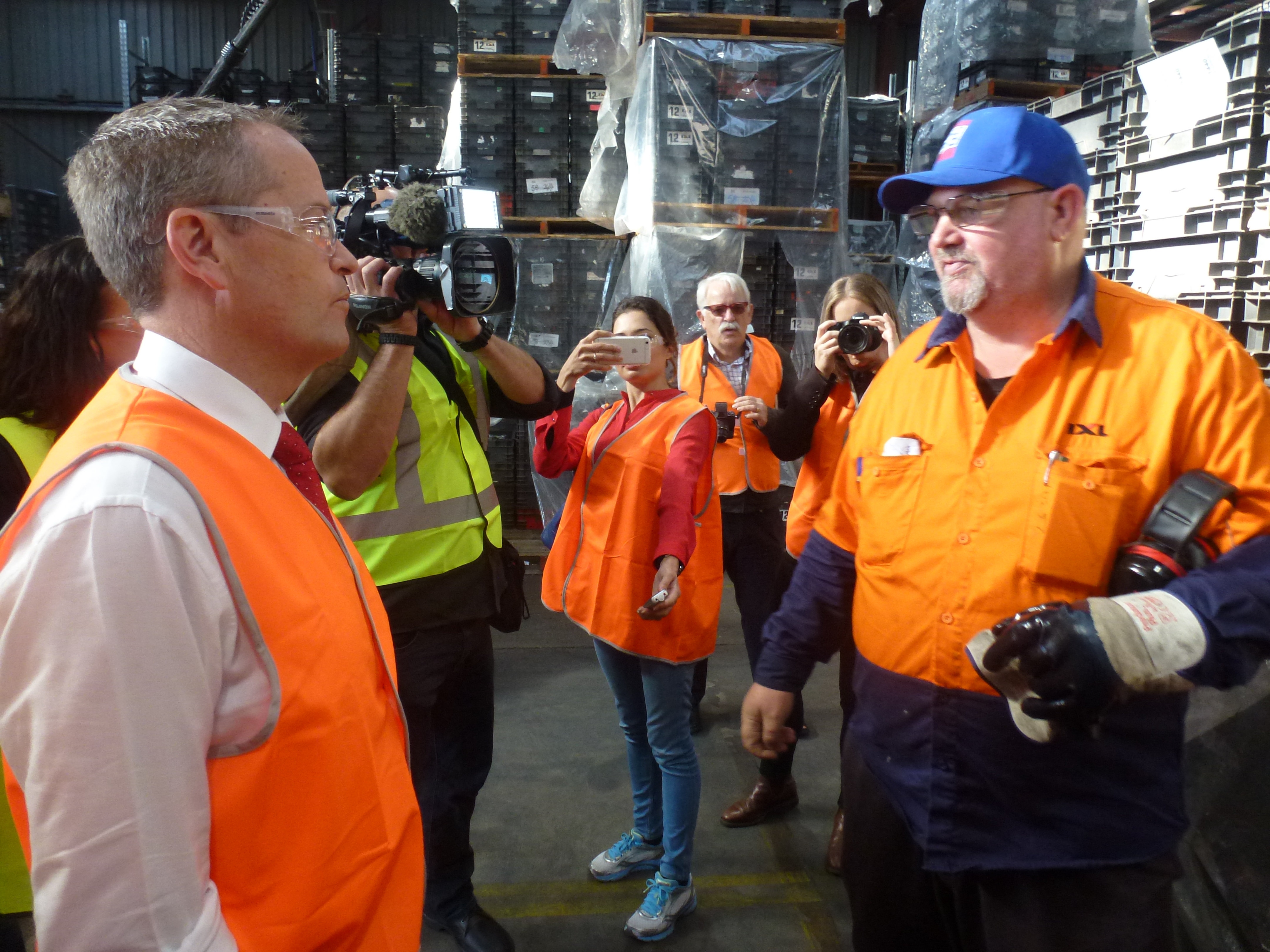 In South Australia a future federal Labor Government would work with state programs to help manufacturers tap into the major shipbuilding and defence programs now being planned.

That would mean an extra $15 million directly for the SA Automotive Supplier Diversification Program (ASDP).  In Victoria, the Local Industry Fund for Transition (LIFT) would share part of an extra $33.1 million across Melbourne and Geelong.

Backwell IXL already has diversified into building, mining and structures for solar farms but needs extra work as its component contracts with Ford and Toyota rapidly wind down.

AMWU delegate Steve Giles said Labor’s incentives to help manufacturers adapt were needed, as the 80 workers at Backwell worried about their families’ and Geelong’s future.

“We’re starting to change, but there’s a long way to go. The company’s out there looking for new work and we need a hand to help us get that,” he said.

In Victoria about 70 of 135 auto component firms have already diversified into other markets.

Mr Shorten confirmed that under Labor auto component firms trying to break into new auto markets would have access to the Automotive Transformation Scheme, which the Coalition wants to axe with the end of car making in 2017.

But the AMWU is concerned that both parties are yet to commit to spending the full amount budgeted for the ATS.

Mr Bastian said: “Over $800 million remains unspent from the ATS and that funding is sorely needed to help workers transition to other parts of the manufacturing economy, not only auto.”