The stresses of FIFO lifestyles and inflexible rosters are hitting the workforce of the giant Ichthys-Inpex gas project hard, with a mass meeting of 1000 employees demanding changes from contractors and the Northern Territory Government.

The workers, including 300 AMWU members, condemned employers Inpex, JKC and their contractors for disregarding the mental health and welfare of their workforce by refusing to consider altering what one resolution termed an outmoded 28/7 “suicide roster.”

The meeting last Sunday in Darwin called on the NT Government and Labor Opposition to meet with project unions to develop a Code of Practice to protect FIFO workers, based on the code that Western Australia’s Parliamentary Inquiry recommended this year.

The meeting of gas plant project workers also called on JKC and other contractors to stop forcing employees to have their RDOs paid out rather than adding the time to their seven days off, which unions put as a contributory factor to mental pressure and poor morale.

The AMWU is taking this matter to the Fair Work Commission. 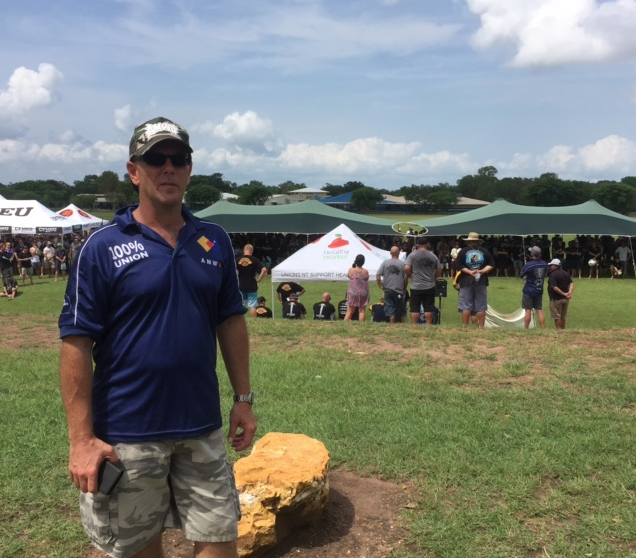 Reform push: AMWU Queensland and NT Secretary Rohan Webb fully backed Ichthys members demand for reform of their rosters and camp regime plus a FIFO Code when he addressed the combined unions' meeting at Palmerston football oval in Darwin.

AMWU delegate Shane McGrath said the 28 days on/7 day off roster imposed when the Inpex gas plant conditions were set over two years ago left the building site way behind other resources projects, with the union’s recent Gorgon win in WA bringing in a 23/10 standard.

AMWU officials said there have been seven suicides of Inpex workers off-site in the past three years.

The Inpex project camp runs on the despised basis of “motelling”, involves management imposing harsh rules including a 9 p.m. curfew and suffers periodic phone and internet black-outs at times when workers want to contact their families.

These are all factors identified by the WA Inquiry as destructive to the mental health of FIFO workers.

“For experienced workers the motelling is concerning and frustrating, you change rooms after every R&R period so you can never settle properly, it never feels like home, you’re forever lost by living out of a bag and looking for where your mates have been put,” Mr McGrath said.

“The discipline regime is too heavy-handed, if you put up shade cloth to try and protect the room from the sun it would be torn down and you’d potentially be kicked out of camp. Then your job would probably go.”

Union delegates are excluded from any disciplinary procedure for breaching the camp code of conduct. Workers want fairness, with union involvement.

AMWU Queensland and Northern Territory Secretary Rohan Webb said the 28/7 roster was a serious issue for all workers on the gas plant construction site, including those who lived locally.

“They are working 10 or 11 hour days in blazing heat, the intensity of temperature and the work are real factors which mean these guys deserve to have some decency in their roster and living conditions,” he said after addressing the meeting.

“The industrial landscape on rosters has been transformed since this project began and it’s time the employers started to look after the health and safety of their workforce.”

Health danger: workers believe their rosters are contributing to a risk to mental health, particularly for FIFOs.