Why Griffin needs Collie as much as Collie needs Griffin

Mick Murray MLA is a former underground mineworker and AMWU shop steward. He is now Member for Collie-Preston and a Shadow Minister. He has spent a lifetime fighting for the working people of Collie and the South-West. This is his take on the ongoing conflict between the coal industry and employees.

"The decision to slash Griffin Coal mine maintenance workers’ wages by a massive 43 per cent has sent shockwaves through my community and raised fears a dangerous new precedent may have been set for the viability of EBAs throughout the country.

Griffin’s agreement was cancelled by the Fair Work Commission earlier this year after talks on a new deal stalled, sending workers back onto the award rate – and significantly undermining their ability to negotiate a new, fair deal.

I worked underground in Collie’s coal mines as a mechanic for 27 years and spent stints in the north of the state working on various projects. During that time there was always a fair amount of argy bargy between the unions and the companies when negotiating – that is the nature of the process and both sides recognised that.

Nothing fair about Fair Work decision

This latest development – where compromise has been replaced with an arbitrary decision from an outside force – is something we never had to deal with in the days gone by, and one that has left me reflecting on the many hard-fought years the labour movement spent to bring wages and conditions up to the standard Australians enjoy today.

There were many cases of industrial action, including strikes, during my time in the industry. While it was never a good place for workers to find themselves, it was sometimes a necessary part of the process when we were fighting for fundamental rights and conditions, many safety related.

One strike at the old Wesfarmers-owned coal mine in the 90s stretched on for 15 long weeks. During that time there was a great deal of anxiety from workers and their families about how wages and conditions would be affected.

I recognise the same trepidation in today’s Griffin workers and their families, especially considering the uncertainty they are dealing with – there being no precedent in the history of industrial relations in Australia for this kind of EBA decision. 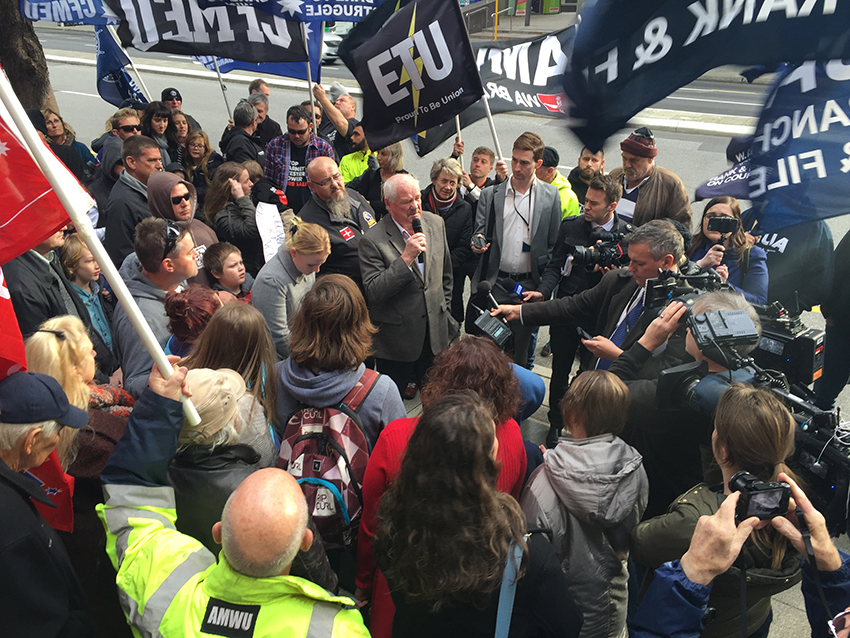 Mick addressing a rally of the Collie community, workers and supporters outside the Fair Work Commission on the day of the Fair Work hearing in Perth

A new low in employee/employee relations

So much of the important work on wages and conditions in Australia happened during Collie’s underground era when, despite their differences, the unions and the companies worked together as best as possible to make sure operations were efficient and employees were paid a good wage.

It is regrettable to see how much the company-employee relationship has broken down over the years. I am particularly disappointed because these companies bought into the coal business knowing full-well the state of the industry and the expectations of the town that relies on it.

It is often incorrectly claimed the depressed international coal price is responsible for the WA coal companies’ difficulty doing business, but this is simply not the case. Every ounce of Collie coal is used domestically and sold under set pricing arrangements, so any reference by the companies to the soft international coal price as a justification for attacks on workers is entirely unfair and inaccurate reasoning.

It is unfortunate that we have seen the demise of the 35-hour week, with the proliferation of shift work having a number of damaging impacts on the strength of our town – including its effect on weekend sport, family time, and the ability of workers to get involved in community and charity activities.

Over the years the coal mine workers have contributed many thousands of dollars of their own wages for the betterment of the Collie community. The Collie Mineworkers Institute – our town’s major indoor event space, used regularly for school, social, and community functions – would never have been built without workers’ contributions.

Two of our most vital community assets – the River View retirement village and the Valley View aged care centre – have also been underpinned by donations from mineworkers, and Collie Hospital is a regular grant recipient from our mining unions.

The support the wider Collie population has shown for our mineworkers over the years is something of which I am very proud. Local people without a direct involvement in the industry – small business, local government, community groups – have always understood its importance in underpinning the Collie economy, and always provided valuable moral support in difficult times.

The coal industry relies on Collie

And while there is no question that Collie relies on the coal industry, it must also be remembered that the coal industry relies on Collie.The natural resources, the local knowledge, the willingness to have mining operations ‘in our backyard’ – Collie offers all of these things to the coal companies and only asks for a fair deal for workers in return.

That ‘fair deal’ is fundamental to the rights of workers throughout the country and anintegral part of keeping all Australian communities strong. This is why people involved in the labour movement are keeping such a close eye on the eventual outcome of the Griffin dispute: because of the impact it may have on industrial relations outcomes throughout the country.

And while much has changed in the years since I worked underground – when a great deal of the basic rights and conditions we take for granted today were won –so many of the same familiar challenges remain."

This article first appeared in The Western Worker, the Journal of the Perth Branch of the Australian Society for the Study of Labour History. If you are interested in finding out more, please email Secretary (and former WA AMWU Print Secretary) Ron Knox at [email protected]