Vic rolls ahead on national track

Victoria’s decision to place the largest order for new trains in the state’s history confirms the AMWU is on the right track as our rail delegates met this week to ramp up our campaigning for local content across Australia.

It is expected to create at least 800 extra jobs. 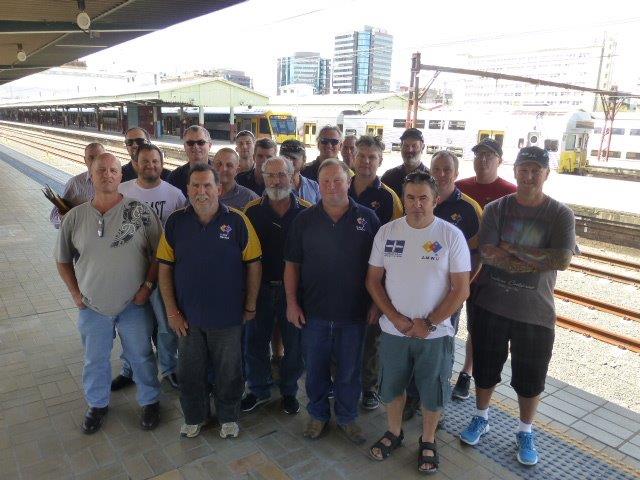 Exciting journey ahead: Our AMWU rail delegates in Sydney this week on a visit to Central Station.

AMWU officials and members have also spoken to influential federal MPs in Canberra on the need to prioritise local train and tram manufacturing, leading to a Senate Inquiry into an industry which includes over 330 components manufacturers.

“There’s $30 billion worth of work coming down the pipeline as the demand for passenger fleets increases over the next 20 years, work that should have guaranteed local content to sustain and grow the manufacturing, maintenance and components industries,” Mr Thompson said.

Mr Thompson spoke to the AMWU’s National Rail Committee in Sydney, attended by 18 delegates from most states and from employers including Alstom, UGL, Aurizon, Downer EDI and Gemco.

He said the AMWU’s challenge was to convince the state governments to co-ordinate their rolling stock programs on the basis of local procurement, rather than placing isolated orders to have train sets built overseas.

NSW is set to award a $4 billion contract for 65 new intercity trains “off the shelf” because, unlike Victoria, the Coalition Baird Government has no compulsory local content requirement.

“It will take a grassroots, community effort to get a continuous rail manufacturing plan across this country. We know it’s achievable from the way our shipbuilders’ won a government commitment to a rolling build of navy ships into the future,” Mr Thompson said.

“Our members in rail have the capacity to highlight this ongoing opportunity for Australia and to help grow thousands of new jobs. These skilled jobs should not be exported if they are paid for by taxpayers who will ride those trains.”

Victoria last week increased its initial order of High Capacity Metro Trains from 37 to 65 seven-carriage sets which will all be built in the state, with the first trains arriving in 2018.

It vindicates campaigning by AMWU rail members, including those among three shortlisted consortiums awaiting a Government decision on the successful tenderer later in 2016.

They are Eureka Rail (including Alstom), Bombadier and Evolution Railway (including Downer EDI and Changchun Railway Vehicles).

The Evolution syndicate is also one of four contenders for the NSW train contract.

It is feared the NSW Coalition could make the same mistake as Queensland’s Newman Government, which sent $4.4 billion of new train work overseas in 2014.

Victoria’ s order includes 455 carriages (an extra 196 from a previous announcement), expansion of the Packenham train depot, and modern high-capacity signaling on every train.

Victorian Assistant Secretary Craig Kelly called on the Andrews Government to maximize local content well beyond 50 per cent and renewed the Union’s calls for new apprentices to be taken on as part of the contract.