Queenslanders Rally to Save Penalty Rates

Queensland unions gave a strong show of solidarity on the issue of cuts to penalty rates, rallying in force this week.

Hundreds of union members from across all unions gathered outside the LNP Government’s Productivity Commission Inquiry in Ipswich. They delivered one simple message: “hands off our pay”.

The Productivity Commission recommendation to cut weekend penalty rates for hospitality and retail workers is promoted as a solution that would increase business activity.

But all it demonstrates is the conservative agenda of attacking workers’ rights and pay, shamelessly targeting the lowest paid and most vulnerable in society.

AMWU Queensland and Northern Territory State Secretary Rohan Webb said that changes would have a devastating affect on the most vulnerable workers in Australia.

“Our union has been campaigning for secure jobs for our future. Increasing casualisation and cutting penalty rates means that our children won’t have secure jobs with decent wages to rely on”

The AMWU joins the Queensland Council of Unions and ACTU in arguing that changes to penalty rates would see a pay cut to those who can least afford it, destroying the financial lifeline that so many families around the country rely on.

Speaking at the rally, QCU President John Battams told the crowd that weekend penalty rates are compensation for “

those peopleat work while everybody else is not, so that they can afford to put food on the table”.

The crowd cheered with their chant of “hands of our pay”.

Labor Federal Member for Blair, Shayne Neumann, and Labor State Member for Ipswich, Jennifer Howard, both showed their support for Ipswich workers who stand to be affected by changes to penalty rates.

If you believe that weekends still mean something in Australia and want to help save penalty rates click here. 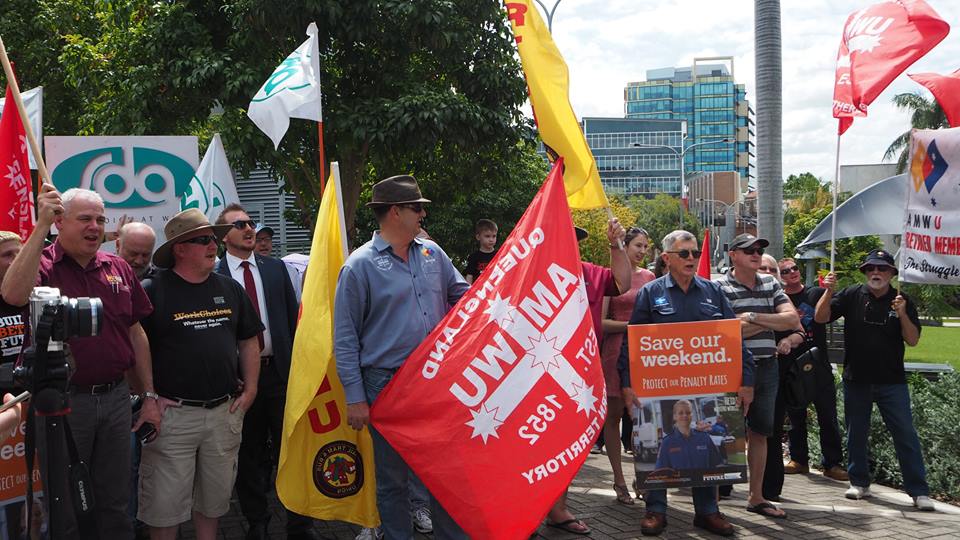