Queensland members at rail giant Aurizon are staying strong as the AMWU fights back against the potential loss of workplace conditions due to a Fair Work Commission decision to terminate their enterprise agreements rights.

Rail unions this week launched a Federal Court appeal to reverse the ruling which strips members of protections against forced redundancy, giving employers open slather on deciding rosters and dictating when leave can be taken.

The FWC decision throwing Aurizon members back to the base rail industry award has emboldened management, which last week withdrew an offer on a new union agreement which seemed ready to deliver members their first pay rise since 2013.

Queensland Assistant Secretary Terry Bradley said that Aurizon’s offer of 4 per cent annually for a three-year-agreement had brought the long-running talks to the brink of resolution, but Aurizon had suddenly lowered this.

“Our delegates were appalled by the sudden about face and remain determined to show management they cannot disrespect their workforce, in workplaces and in the courts,” he said. 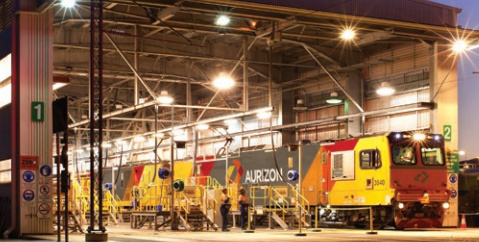 The Fair Work Commission last month agreed with Aurizon that it should not be bound by existing enterprise agreements because they dated from before the company’s privatization by Queensland’s Government in 2010 and did not reflect private rail freight industry standards.

Within days of that FWC decision Aurzon brought forward 150 redundancies at its Redbank workshops, which it will close.

Mr Bradley said the union would now consider industrial action against Aurizon, to be decided by members.

“Members can be proud of staying united in resisting Aurizon’s push for an inferior agreement. We’ll keep negotiating,” he said.

The ACTU believes the FWC ruling must be overturned because it set a dangerous national precedent that workers could be automatically relegated to award conditions once their previous agreement expired.

A senior AMWU Aurizon delegate, Bernie Misztal, said there was concern the company might now bring forward the closure of its Townsville operation with 50 jobs from next year.

“Management are going full steam to alienate their remaining workforce, so they really should think if this is the smartest way to treat their most valuable asset,” he said.