A major paper sack manufacturer in Melbourne is set to expand and hire extra workers after the dedication of AMWU members helped the firm win a new multi-million dollar export contract.

Orora St Regis Bates could boost its workforce by at least 21 jobs when it installs a new multi-wall production line next year.

Its 69 workers are pleased that the contract estimated at $25 million a year is likely to bring extra job security as Orora have taken out a new lease on its site at Keon Park.

It is expected to invest about $20 million there and seven workers have already been hired for a new shifts on existing machines. 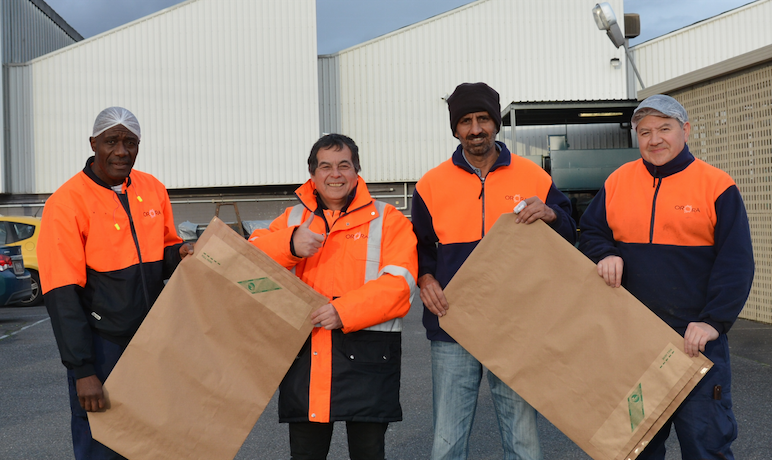 Agreement in the bag: (L:R) AMWU delegate Mohammed Mohamadu with Father of the Chapel Luis Ferrada and members Karm and Benito Caro.

AMWU delegate Luis Ferrada said the unionised workforce and had shown it was prepared to be co-operative to improve efficiency and provide stability.

Members recently voted up a new union agreement over four years at 2.75 per cent pay rise per annum and have adjusted rosters to give extra RDOs taken mainly in quieter months of production.

“We employees have put a lot of effort over the past year in to help the company gain this extra work which should benefit everyone,” he said.

“We’re looking forward to it, people are very happy about the job security and prospect of more jobs – but we do not want management to be overly demanding of the workforce.”

Orora is likely to be running four machines 24/7 and has invested in replacement equipment from Germany, which is expected to be installed in early 2016.

“The warehousing will all be new, we will have the extra, new line with an airtight hygienic production facility so this is a big investment,” Mr Ferrada said.

“The company is expanding which is great but we will also be concentrating with our delegates to ensure our agreement is properly adhered to,” he said.