The AMWU has joined a community and unions rally outside the opening day of ALP National Conference to highlight the destructive impact to Australian jobs of a swathe of free trade deals.

Union officials and members grabbed the attention of arriving delegates over the failure of trade deal with China, Korea, Japan and the upcoming Trans Pacific Partnership to protect Australian manufacturing jobs and respect laws made by our elected parliaments. 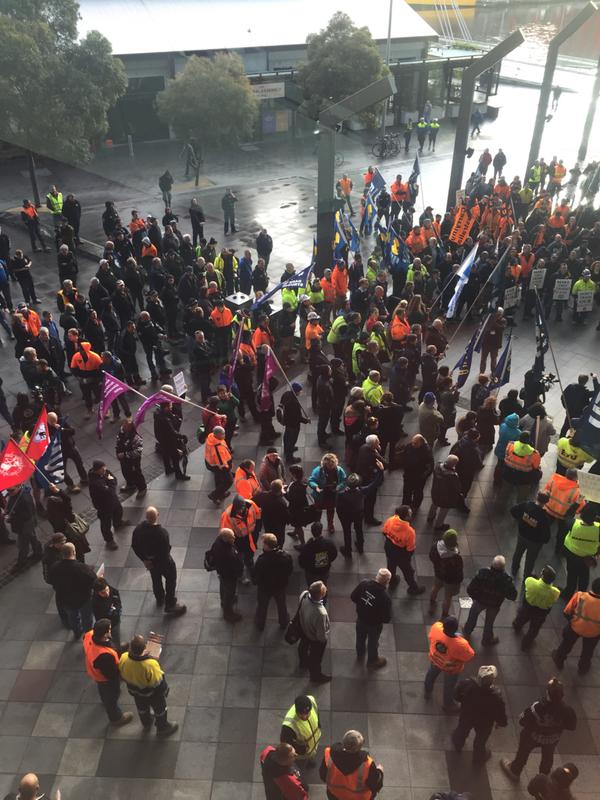 The union stood with groups including Choice and Get Up  to urge  the Federal Opposition vote down the China Australia Free Trade Agreement  in Parliament iunless big changes are made.

AMWU National President Andrew Dettmer said the AMWU was heartened by the recent stance of ALP Leader Bill Shorten against the inadequate labour protections from the agreement.

“In our view, these provisions – around labour mobility, training, worker protections (or lack thereof), corporate rights and more – make the agreement diametrically opposed to core Labor values and, as such, cannot be supported by the ALP in its current form,” the unions said.

There has been growing outrage among AMWU members in meetings across the country as they realise the grave implications of the China agreement (CHAFTA) for future Australian jobs.

Its Investment Facilitation Agreement allows the importation of entire workforces on any project valued over $150 million which has a Chinese investment component as little as $22.5 million.

It removes the skills assessment normally required under 457 Visa programs for 10 trades – including diesel mechanics and motor mechanics. That is a severe risk to health and safety standards in workplaces.

The CHAFTA will expand to erode labour market testing on all trades under the 457 visa program.

And it introduces Investor State Dispute Settlement (ISDS) mechanisms, which means Chinese businesses can sue Australian governments if they think our laws disadvantage them.

Mr Dettmer said Labor MPs should oppose the existing CHAFTA deal , just as they should ban the ISDS previsions in the Trans Pacific Partnership which were set up to allow multinationals to ride roughshod over Australian corporate law.