The new year has brought fresh faces to the AMWU’s Victorian office as we welcome two multi-lingual young activists aiming to help our union speak all workers' languages.

Ms Azita Arian and Mr Dawn Poulose are our summer interns for 2016, and will be spending the coming three weeks with our organisers and specialist staff seeing how the AMWU operates.

State Secretary Steve Dargavel this week welcomed the duo, whom he carefully selected from many candidates interviewed through the Victorian Trades Hall Council’s intern program.

“It’s refreshing to see the enthusiasm of Azita and Dawn, caring young people with the passion for unionism as a positive force for good,” he said.

Mr Dargavel said they represented the community diversity so integral to the AMWU’s present membership and future.

Ms Arian, whose family came from Iran as refugees when she was a small child, is a para legal with a leading Melbourne law firm who is completing a law-commerce degree (including industrial law) at Deakin University.

“I’m grateful to be bi-lingual and have the exposure to another culture, I think it can help you to become a well-rounded person,” said Ms Arian, who also speaks the Persian language of Farsi. 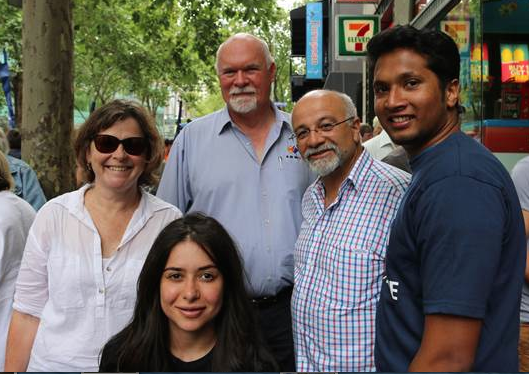 Mr Poulose, a business and psychology student at Victoria University, comes from the Indian state of Kerala and fluently speaks English, Tamil, Hindi and his local language of Malayalam.

He is living in Ballarat and has already enjoyed getting involved with the local community, helping organise an Indian cultural festival.

Ms Arian and Mr Poulose said it was only through university that they learned of the importance of unions for advancing decent work conditions, which they are concerned that most young people have very little idea about.

“I didn’t know what unions had done for communities in different parts of the world, you wrongly assume that Governments have handed us decent conditions at work,” Mr Poulose said.

On their first day they were briefed by Mr Dargavel and excited to experience union solidarity in action at a Maritime Union rally for the seafarers from Alcoa’s ship Portland.

Both hope working with the AMWU might assist them to develop new ideas on informing more young people about workplace rights and recruiting them as union members, via social media or by improving the way employee inductions happen.