The gates have been shut on the Foragcs Shipyard in the Hunter throwing its last 150 skilled employees out of work as the pain inflicted by the Coalition Government’s failure to bring forward shipbuilding projects deepens across the nation.

The $21 million purchase of the family-owned yard at Tomago completed on Wednesday was the signal for the new owners Civmec to close down the iconic facility after 53 years, meaning redundancy for the shipbuilders who were escorted off the site within hours.

AMWU members lamented that it should not have been that way, as the yard would still be capable of taking on major defence projects including patrol boats and two supply ships if the Turnbull Government had prioritised these.

Since 2012 the Forgacs Shipyard has gone from almost 1000 workers to being barren, a fate shared by BAE’S Williamstown yard in Victoria as the industry was allowed to fall into the valley of death.

In less than three years of Coalition Government, 1665 shipyard jobs have gone nationally. 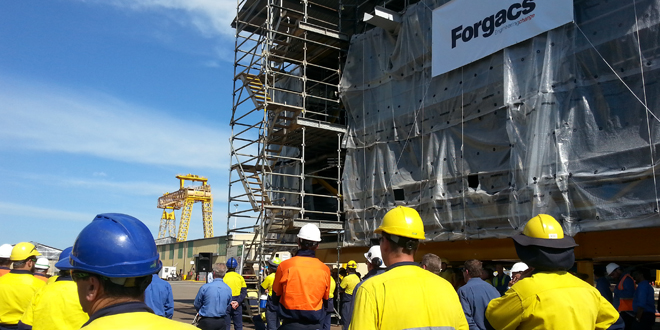 Goodbye for now: workers on-site at Tomago in the closing months of the Forgacs shipbuilding facility.

“There’s a patrol boat contract worth $1.3 billion with maintenance over 20 years, we have the slips, the facilities in the Hunter. The company was going after it with Thales but we got no support from government at any level, federal or state,” said AMWU delegate Craig "Curly" Morris.

“Even if Civmec do put their investment in, it’s going to take a fair while to set this up again. They’ve trained us up but we’re out now, what a horrific waste of money – this is political to the bone.”

Even though everyone expected the sale, the workforce was given no idea it would be completed Wednesday until suddenly told mid-morning, with redundancy details prepared for them and not enough time given to properly clean lockers before being escorted off the site.

Mr Morris estimated that up to a quarter of the employees had alternative work, but many with young families had few prospects to meet household expenses and mortgages.

It is also likely to re-employ some Forgacs workers but that is little comfort to a Hunter community in a manufacturing jobs crisis.

In January, Forgacs had missed the shortlist for the 21 Pacific Patrol boats after the Coalition Government also denied the firm the chance to bid for two navy supply ships, plus a new icebreaker, sending that work overseas.

“Two years ago the Coalition Government said the supply ship work was too urgent to be done locally, but they still haven’t awarded the contract. Now those skilled shipbuilders are out of work, many families are facing a bleak future,” Mr Thompson said.

“This is the first major announcement of job losses under PM Turnbull’s watch. But unless he seriously engages with the Australian shipbuilding industry, we fear it won’t be the last.”

AMWU delegate John Mountfort , a shipbuilder of 20 years experience, said he had emailed his details to Civmec as that was the only hope many workers now had.

“With what’s happened here, I reckon old Mr Forgacs would be rolling in his grave,” Mr Mountfort said.