FIFOs hide depression for fear of being sacked

Fly-In, Fly-Out workers suffering from mental health conditions are sometimes failing to take prescribed medication for fear of losing their jobs, the AMWU revealed to a Parliamentary Inquiry this week.

WA State Secretary Steve McCartney said  mining industry FIFOs surveyed by our union believed that if their employer found out a worker had a mental health issue by traces of medication showing in regular urine testing it would put their employment in jeopardy.

“The responses showed some of them were so worried that they were not taking anti-depressants,” he said after reviewing the survey of 300 workers..

“With the resources construction boom slowing down, leaving workers worried about the future, the pressure on FIFO workers to stay quiet about mental health issues is going to increase.” 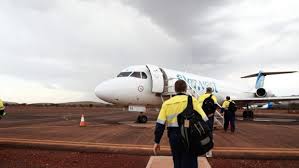 Heavy load: the FIFO llfe can be lucrative but imposes heavy emotional burdens and pressure on workers and their families.

Mr McCartney spoke after giving evidence before the WA Parliamentary Inquiry into FIFO work, sparked  by union pressure after nine workers in the Pilbara took their lives in the previous 12 months.

He said the reluctance of workers to tell management showed a fundamental cultural problem in the attitude of companies, who had to start addressing mental health in OH&S policies as seriously as physical injury.

“A lot of people are too afraid to take antidepressants short term due to drug testing and as a result management find out a person is suffering from depression and then usually confidentiality is out the window and the whole team finds out.”

“In my experience people who admit to having mental health issues find it hard to keep a FIFO position as if they choose to take medication it comes up in urine tests and once it does the employer won't have anything to do with them.”

Nearly 60 per cent of workers said worry about harm to future employment and the reaction at the workplace were the main reasons FIFO workers didn’t seek help for mental health conditions.

About 35 per cent of respondents said fear they could get a workmate struggling with a mental health condition into trouble with management prevented them trying to help.

Mr McCartney said  mining bosses’ claims of pastoral care  provision  through on-site chaplains and helplines had not inspired any confidence.

The AMWU on-line survey revealed that worry about family was a key driver of stress with about 65 per cent citing poor communication links from site to home as a problem.

“When we asked them what they would change about the FIFO lifestyle, almost 80 per cent suggested shorter roster lengths, so they could see their families more often, with improvements to communications services on site also suggested,” he said.