The union’s Tom Hale said the new labels to be phased in for all Australian food products  were the best effort yet in giving consumers the chance of making an informed choice by properly identifying  where the food on supermarket shelves was grown and processed.

Mr Hale, National Food and Confectionary Division Secretary,  said the labelling deserved to be given a fair go during it’s two-year transition phase from July 1.

“They may not be perfect, but these new labels at least should take away a lot of the hopeless confusion when shoppers were faced with information like ‘made in Australia from local and imported products’,” he said.

“We hope that as people gradually become familiar with them, consumers will be able to make far better-informed choices on buying products reliably and hygienically processed in Australian plants by our AMWU members.”

Food with strong Australian involvement will carry either of three kangaroo green and gold labels.

CLICK HERE TO SEE THE FULL DETAILS ON HOW THE NEW LAWS WILL WORK.

Mr Hale was concerned that multinational food companies would keep resisting the labelling change because they feared it might hit their bottom line.

“Behind it is their dislike of telling their customers where the food is really from because they are worried they wouldn’t be able to justify the higher prices,” he said.

“People are only prepared to pay more if they know it’s an Australian-grown and Australian- produced product they can have confidence in putting in their kids’ mouths. Multinationals find that hard to swallow.”

He predicted that some of these companies would not rest from lobbying politicians in Canberra to wind back the labelling laws, particularly if a Liberal-National Coalition Government were to be re-elected.

But the food poisoning scare last year with Chinese-packed berries in Nanna’s and Creative Gourmet brands had changed the public debate on the issue for good, for the better.

From July 1, Australian products will have either of three, simple green and gold charts -  with a kangaroo symbol. 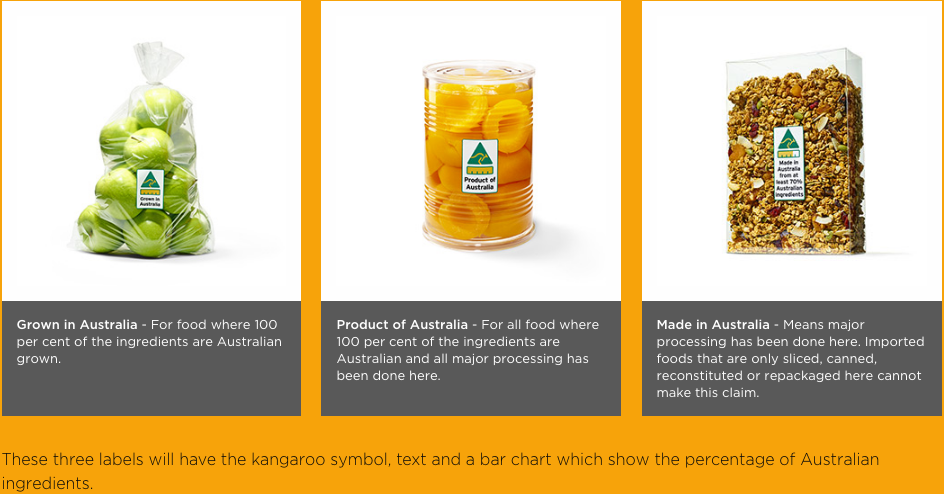