CUB out of bounds at Grand Final BBQs

The number of people enjoying Grand Final barbecues this weekend without the tainted taste of CUB beer looks set to exceed the crowds filling the stadiums at both the AFL and NRL deciders.

On GF eve, over 8000 supporters have registered their CUB-free barbecues on the Australian Unions website, as a show of solidarity with 55 workers unjustly deprived of their brewery jobs.

You can register your CUB-free party here.

Grand Final barby fever (below): our CUB members enjoyed a pre-GF footy barbecue outside the Abbotsford brewery this week, without a drop of the beer they normally help produce and consume. 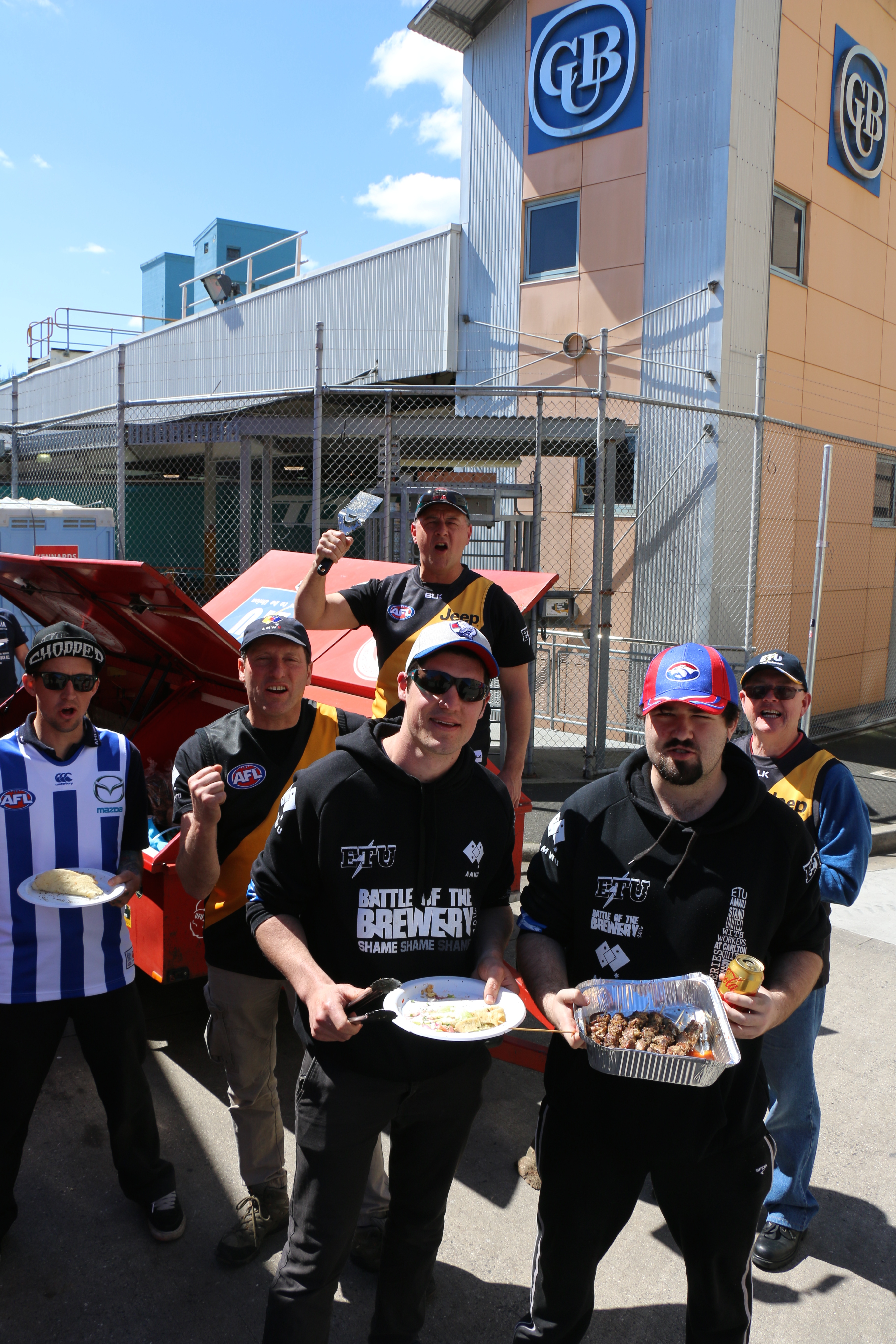 Production at CUB’s main Abbotsford brewery is way behind the play without the  expert fitters and electricians, recently sinking as low as 180,000 slabs per week  compared with a normal 1.1 million.

“This is a Grand Final where people have made it clear they are happy to do without  Carlton, without VB, Pure Blonde or any other CUB product and it’s still not too late  to register your barby,” said AMWU delegate Chris Brown.

“We appreciate the support and the powerful message it sends to CUB, that  everyone will enjoy a steak, a snag and watching the game over a drink which isn’t  made by this anti-worker multinational.”

Your guide: The beers to AVOID.

The 55 maintenance workers have been jobless since June when CUB changed  contractors, which meant they were sacked then offered their jobs back on inferior  wages.

CUB’s main warehouse in Melbourne’s west is reported to be emptying of product  made at its Abbotsford brewery, with much of the packaged CUB beer supply to  Victoria now brewed at Yatala in Queensland.

“There’s a lot of empathy up here with the Victorian CUB workers, we got some  great feedback from shoppers -  some said, ‘my goodness, is that still happening?’,”  said AMWU officer Marion Lister.

“Nearly everyone was good, took a leaflet and guys liked the stubby holders.”

CUB’s management are already facing their own “elimination final”, with the  company’s multinational owner SABMiller officially being taken over next week by the world’s biggest brewer Anheuser-Busch InBev.

Decision-making at CUB is in a tense holding pattern as some senior executives appointed by SAB Miller for CUB and Asia-Pacific have already left their positions – or will do so soon.

CUB’s contractor Programmed is also due to finish at the brewery this week, after its deal with CUB fell apart when its non-union maintenance crews failed to fix equipment and keep production levels up.