Ball still in the air at Bitzer

AMWU members from Bitzer in Victoria are still going strong seven weeks into their strike against the refrigeration firm trying to divide them by discriminating against casuals.

Most of the 54 workers have been “clocking up” more hours at their union protest camp outside the gates of the Sunshine factory than they would if they were at work.

They are keeping the camp occupied 24-hours every day on a rotating roster of three shifts, occupying themselves by talking, reading, playing scratch games of football and cricket in the street.

“Russian Poker” has become the card game of choice, introduced by our members of Vietnamese and Filipino backgrounds.

Night shift take turns to sleep in the on-site caravan or in their cars.

And no one is going hungry, with the AMWU barbecue wagon on site, as well as members bringing home-cooked meals to share  and the union funding take-away or fruit at other times. 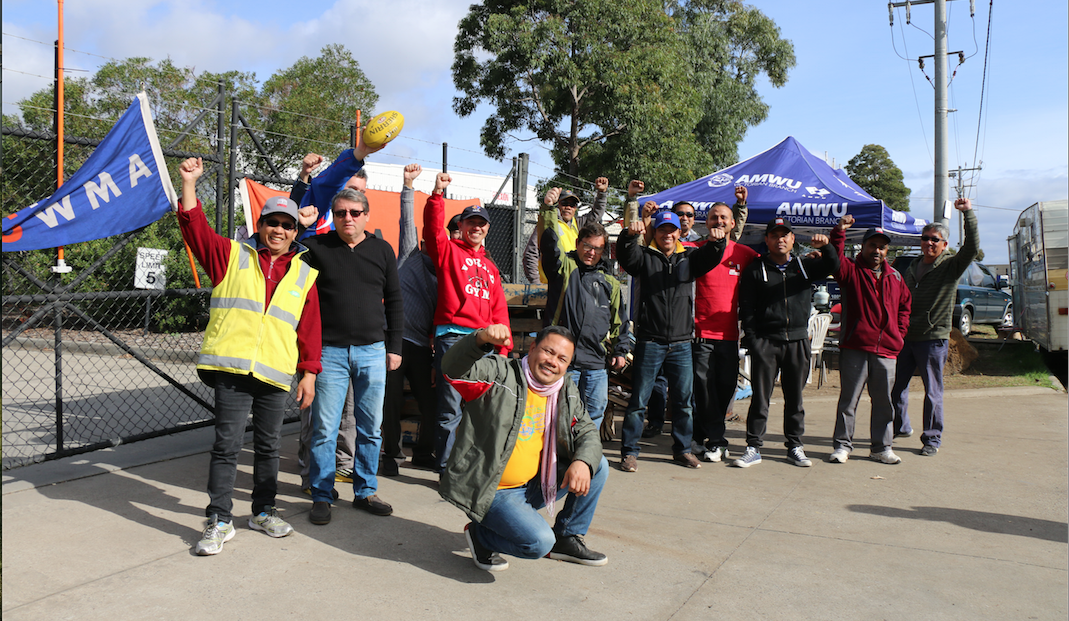 “Everyone is feeling good, we feel strong and we’re getting more determined because we know we’re doing the right thing for our futures,” said one member, during a card game under the AMWU gazebo outside the quiet, idle Bitzer plant.

Production of industrial-sized cooling evaporator coils and condensers halted many weeks ago when the workers took action after the company refused to make a fair offer on their new union agreement.

German-owned Bitzer has another plant in Sydney, but only the Sunshine plant can supply customized industrial refrigeration to supermarkets in the Australia-NZ market.

The managers want to interfere with work hours-rosters and stop contributing to income protection - but what really rankles our members is the intent to deny the EBA wages and conditions to any new workers, particularly casuals.

“We don’t want them being able to bring in two levels of wages, they want to gradually knock off the permanent workforce and bring on casuals at inferior rates and conditions,” said one of our experienced AMWU members, among workers with more than 20 years service.

The union wants eight casuals who have been employed for an average of about two years to be made permanents under the EBA.

The last talks were on May 11, but little progress has been made so far.

The members said their morale was being kept high from daily visits by their AMWU organisers.

They’ve also hosted unionists from nearby industrial sites, members of the National Union of Workers and the Rail, Tram and Bus Union. Student activitists have also visited offering support.

“It can be difficult but we’re making the most of it – we’re okay financially with union members' support and we  won’t go back until everyone shares equally in the wages on offer, including future employees and our casuals,” said another AMWU member.