An honoured Filipino guest at this week’s AMWU National Conference said our union’s voice was vital to influencing her nation to improve workers protections and stop persecution of unionists.

These were the basis of low-wage employment in the metals, electronics, food and services sectors of the Philippines and scrapping them had been a core election promise of new president Rodrigo Duterte.

“It’s very important for us to receive the political and moral support, it helps us when the Filipino Government realises our cause has Australian and other international backing,” said Ms Dioquino, MWAP National Co-Ordinator.

“We have high hopes that we can end this ‘contractualisation’ and we won’t let our guard down.”

Ms Dioquino has been active in Philippines unionism for 20 years, with the metal workers alliance taking in company-based unions in auto, shipbuilding and mining.

She was among foreign observers at the conference, including  senior unionists from Indonesia, Vietnam, Britain, New Zealand and Canada. 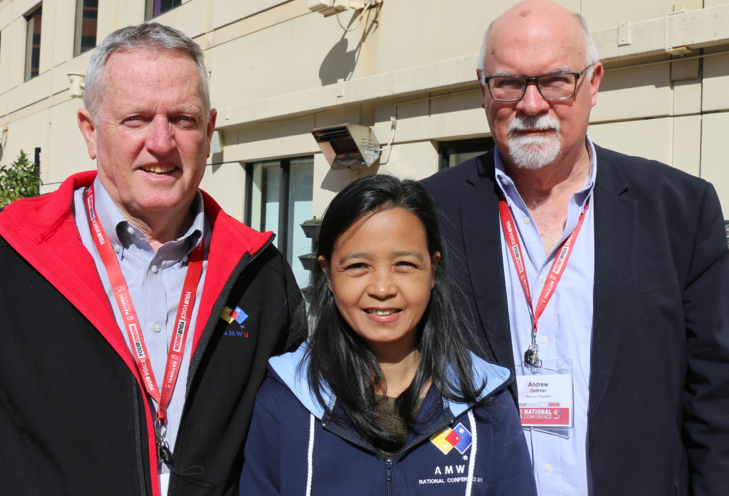 The AMWU has been sending two of our activists to the poverty-stricken Philippines every year since 1984 and actively supports programs by Australian union aid agency APHEDA.

The Metal Workers Alliance regard this as invaluable for educating its own activists and gaining world attention over intimidation of union activists by police and intelligence agencies.

There have been 26 murders and disappearances and 574 assaults in the past five years.

“All this happened under neo-liberal policies to strain the last drops of sweat and blood from our Filipino workers,” Ms Dioquino said.

A skilled metal worker in the Philippines earns a maximum of $12 a day in Manilla, less than half of the daily cost of living for a family.

There is no minimum wage and less than 10 per cent of workers are unionised.

This is a major reason 5000 skilled workers a year go overseas, including to Australia.

“Unions must organise in a very discreet manner, we recruit and conduct education quietly in the community and wait until we have a strong majority before we officially register,” Ms Dioquino said.

Ms Dioquino saw her first visit to Sydney as an opportunity to further inform the AMWU.

“It was inspirational, meeting people on the run, living in safe houses for being no more than a delegate or union leader,” he said.

“Those companies doing this operate in Australia…this is bigger than us, bigger than just my site or my country.”

AMWU President Andrew Dettmer said working with unions in our region was core business for us and our members gained as much as those we sought to assist..