A fortnight of workplace rallies and community meetings by 200 members concerned over the future of Downer EDI’s  workshop in Maryborough convinced the Queensland State Government to act on a new maintenance contract for the next seven years.

Downer EDI is expected to receive up to $300 million of the package of rolling stock maintenance and overhaul works.

The breakthrough was revealed the day after more than 200 local worker and their families attended a “Save Our Jobs, Save Maryborough” meeting at the regional city’s Town hall, capping over a week of intense AMWU campaigning on securing and growing jobs for the area.

The AMWU learned of the success hours before the Premier was due to visit Maryborough. 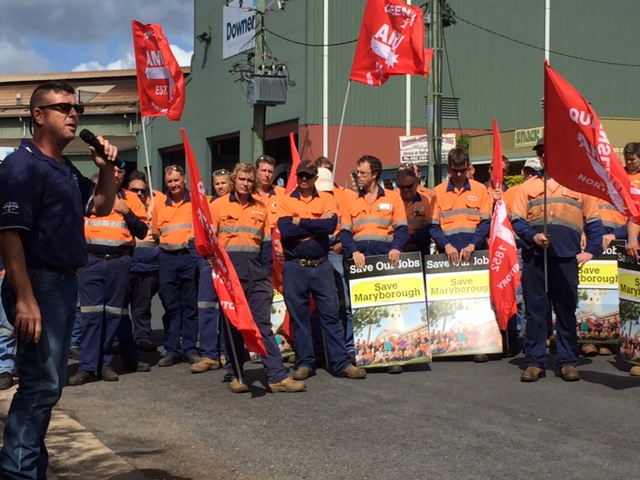 “This announcement proves that when regional communities come together and use their voices, we can achieve great things,” Mr Webb said.

“Although this announcement is a great step, we will continue to lobby hard to make sure the work and jobs for Maryborough are secured through the process ahead.

“This announcement doesn’t mark the end of the community campaign, in fact it’s only the beginning. We will continue to mobilise the local community and build support.”

Projects for Maryborough and Townsville will include the overhaul and modification of Queensland Rail's L-series carriages, the diesel Tilt Trains, train units, locomotives and wheel sets.

Mr Webb said it was also good news for the Townsville community, rocked by the Queensland Nickel closure.

AMWU National Secretary Paul Bastian said it was heartening that the Queensland Government was seizing the potential for rail to invigorate local communities, in line with over $11 billion into rail manufacturing and infrastructure by Victoria’s Andrews Government.

That includes $980 million over four years on new trains, including five extra X’Trapolis trains being built by AMWU members in Ballarat and 28 high capacity trains.

NSW rail delegates are set to rally in Sydney today outside Transport NSW to drive home the need for the federal Government to make transport infrastructure grants to the states dependent upon local procurement being prioritised.

The NSW Baird Government is finalising a $2.8 billion contract for 65 new intercity trains, but it is likely to import these "off the shelf" from Korea when they could be made in NSW.

“The AMWU will intensify it’s efforts to get the next Federal Government and all states o catch up and seize that initiative, as Queensland and Victoria clearly have.”