Wrath of Kahn descends upon compo

AMWU members took their determination to save workers’ compensation to Canberra this week, urging Senators from all states not to undermine payments and protections for those injured.

Kahn Goodluck, a boilermaker on the Curtis Island gas projects in Queensland, joined delegates from Victoria, NSW, ACT and SA trying to convince the politicians to vote down draconian changes to the Commonwealth’s Comcare scheme.

The Abbott Government wants to get big employers in the states to switch over to Comcare, threatening the collapse of the state schemes that have served the workforce for decades.

Lower premiums for those big national companies would be at the cost of workers, cutting back eligibility to compensation and specialist treatment for those injured on the job.

It was so cold in Canberra that Mr Goodluck had to change out of his Queenslander shorts, but all our AMWU delegates fired up once they arrived at Parliament House, getting pledges from Labor MPs and Senators Nick Xenophon and John Madigan to oppose the changes.

“I’m working for Bechtel, covered by the Queensland compensation system which we need, because construction has a higher injury rate than most other industries,” Mr Goodluck said.

“We stand to lose a lot if this Comcare scheme takes over – including travel to work cover and industrial deafness claims.

“You lose rights because Comcare picks which doctor you have to see.

“When there’s safety incidents on the job you need to get OH&S Inspectors on site as quick as possible to look at the problems and get the place back operating safely.

“But Comcare only has 40 inspectors for the whole of Australia and Papua New Guinea, where in Queensland we have about 300 inspectors under the state scheme. 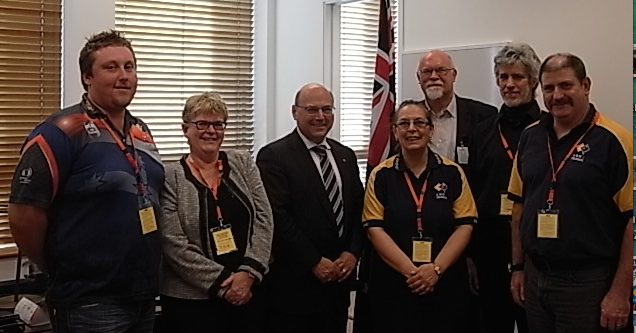 SA delegate Peter Hunter described the visit as “a motivating experience and I can see why it is important for delegates and members to take an active part.”