Subs victory by the dozen

The Turnbull Government’s belated commitment to order a full fleet of 12 submarines worth $50 billion signals a massive victory for the AMWU shipbuilders who forced it to abandon a cut-price proposal to scale back the build to eight.

The outcome of 12 confirmed in the Defence White Paper should mean billions of dollars of extra investment and thousands more future jobs, but only if this Government is made to live up to its past pledge to build and maintain the entire fleet in Australia.

“Every AMWU shipbuilding member who’s campaigned over the past few years to make sure we get the full 12 submarines can be really proud of this outcome, this vindication, but we know our struggle is far from over,” said AMWU National Assistant Secretary Glenn Thompson.

“This Coalition  were set to hand the nation’s biggest project to Japan until our members forced them to back down, but if we’re going to have a national shipbuilding industry backed by an innovative supply chain across all states, we have to keep the pressure on.”

The overdue Defence White Paper failed to take the possibility of an overseas build or diminished Australian content off the table, both of which remain live options under the “competitive evaluation process” between the Japanese, German and French bidders.

“This White Paper is a political document designed to shore up the Coalition’s poor electoral prospects in SA, but its fine rhetoric about a continuous build of warships beyond 2019 gives no comfort whatever to shipbuilders who have already lost their jobs,” Mr Thompson said.

“The subs are the bedrock of the defence industry’s future, we cannot  let this Turnbull Government go to an election if it hasn’t ruled out an overseas build or hybrid build.” 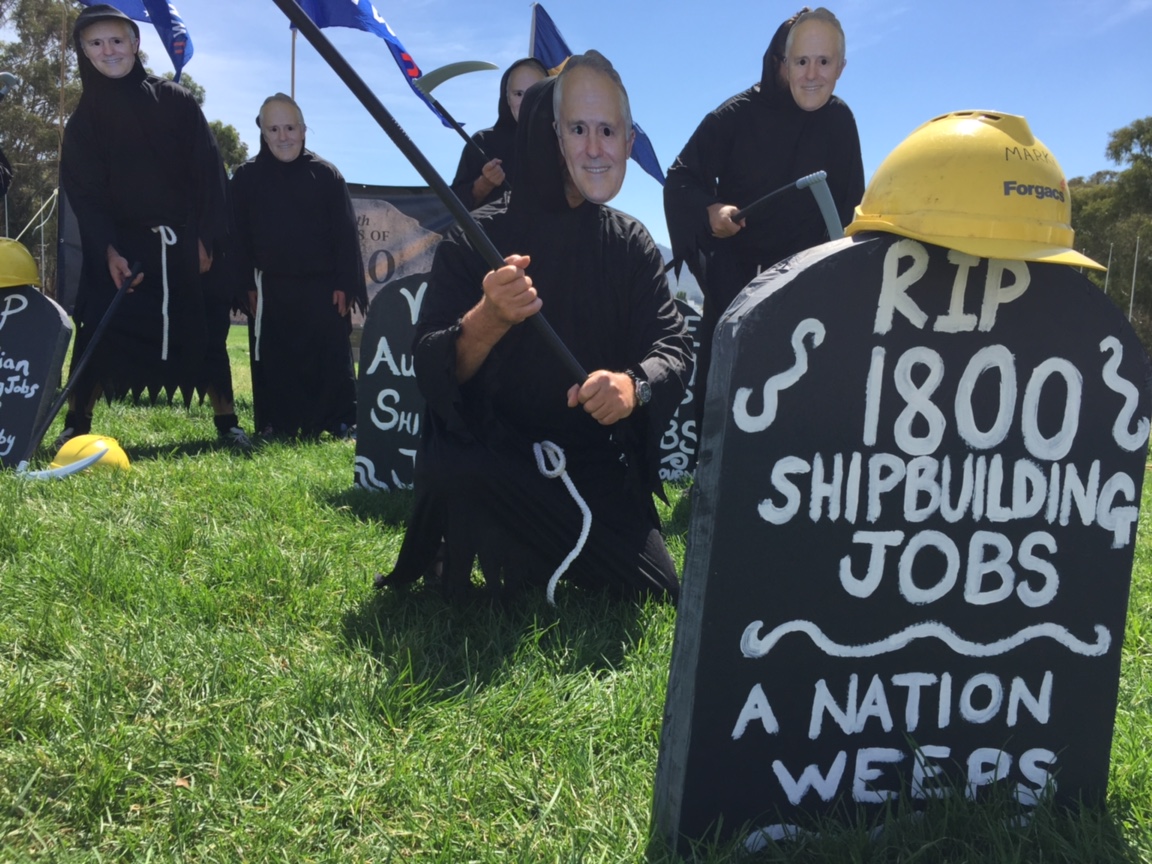 Grim harvest: the AMWU's "Grim Reaper" protest in Canberra this week over PM Turnbull's failure to save 1800 ship jobs.

The AMWU recognises that the White Paper lays out a blueprint to link defence and industry through a Centre for Defence Industry Capability, which will encourage innovation among private firms and the CSIRO to the tune of $23 million a year.

The Government has already sent orders for two navy supply vessels offshore and mismanaged the procurement of a new icebreaker.

“This White Paper tells us little more  than we knew months ago, when we need new orders right now,” Mr Thompson said.

He said the redundant shipbuilders who descended on Canberra this week told the true story when they cast Malcolm Turnbull as the Grim Reaper, among the gravestones of 1800 shipbuilding jobs. 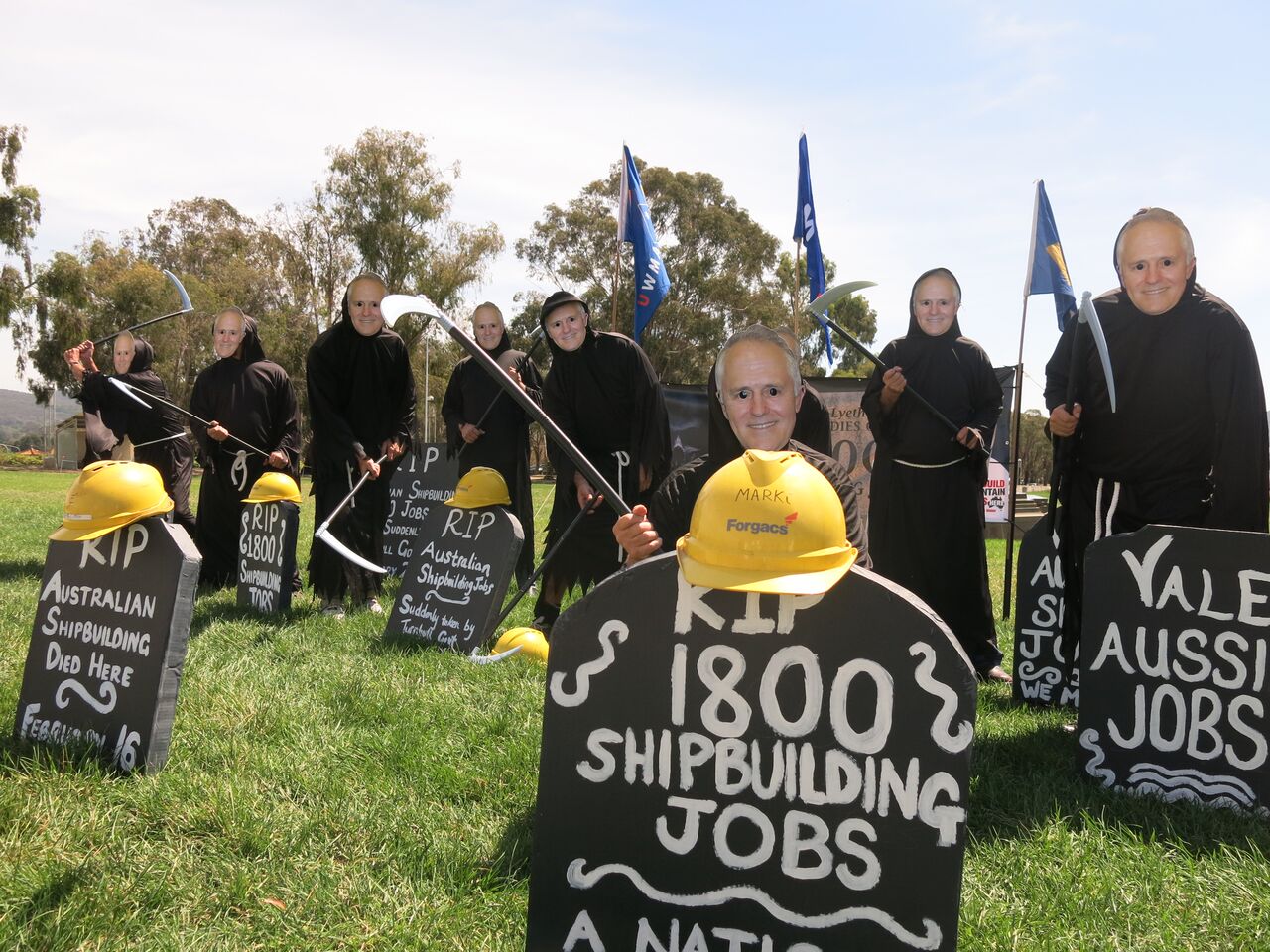 “PM Turnbull’s fine rhetoric will not help 1800 shipbuilders who have lost their jobs with Forgacs closure, the imminent shutdown of BAE Williamstown and reduced work at ASC in Adelaide,” he said.

“There’s another 1300 jobs at risk there with the scaling back of the Air Warfare Destroyer program, the PM must act decisively to bring forward new orders.“

ASC delegate Glen Dallimore welcomed the decision on 12 submarines but said the White Paper lost credibility by failing to lock in an Australian build.

“It’s nice to say they will build all these ships, but if the Government lets the workforce dwindle through lack of orders we’ll be right back behind the eight ball, all our jobs, our skills will have been lost – again,” he said.

“All this talk about manufacturing capability is mostly lip service, it’s about politics and it drives me nuts.”

Below: AMWU National Assistant Secretary Glenn Thompson talks to media outside Parliament amid the tombstones, while union members give their jobs a decent burial. 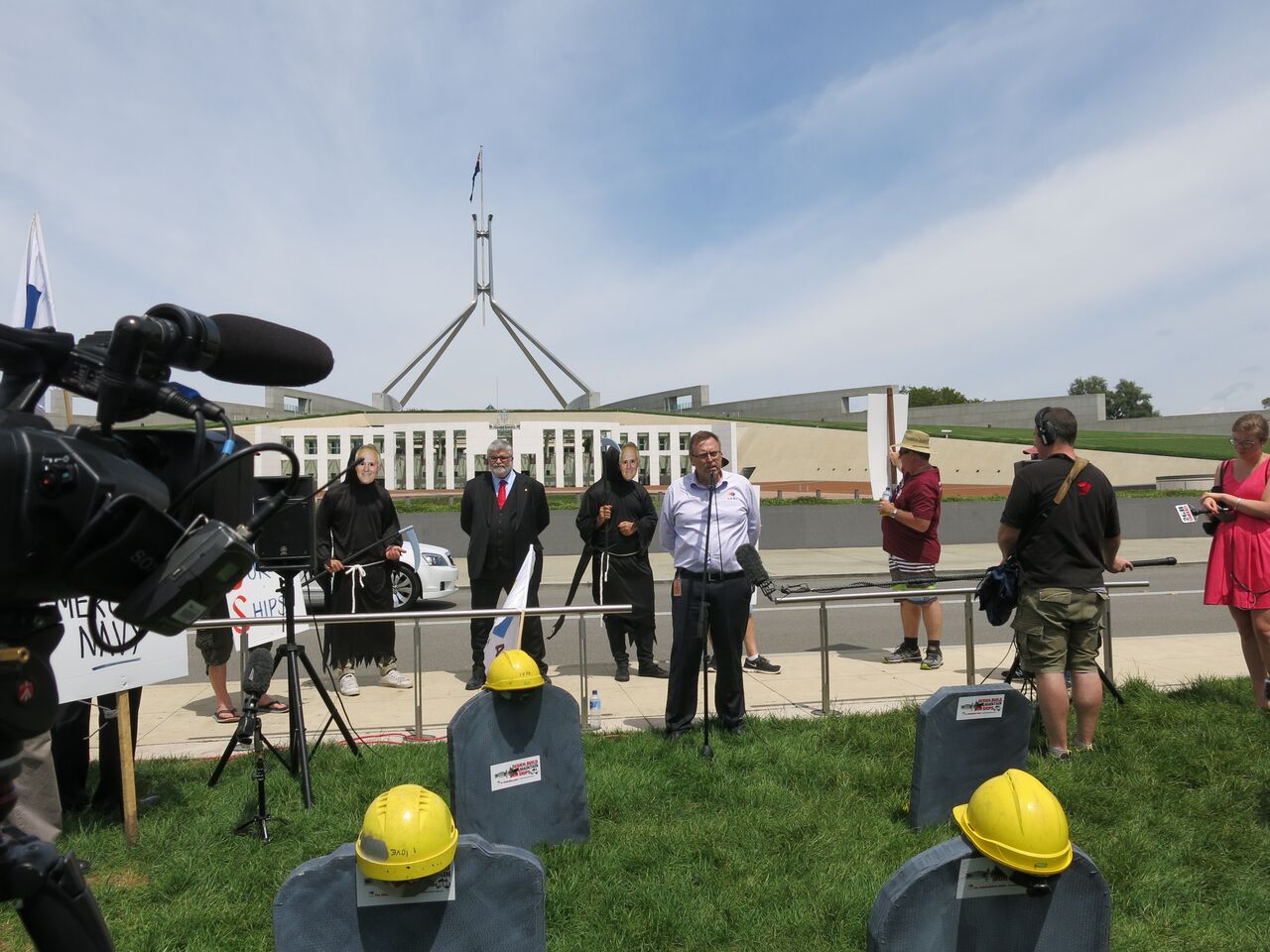 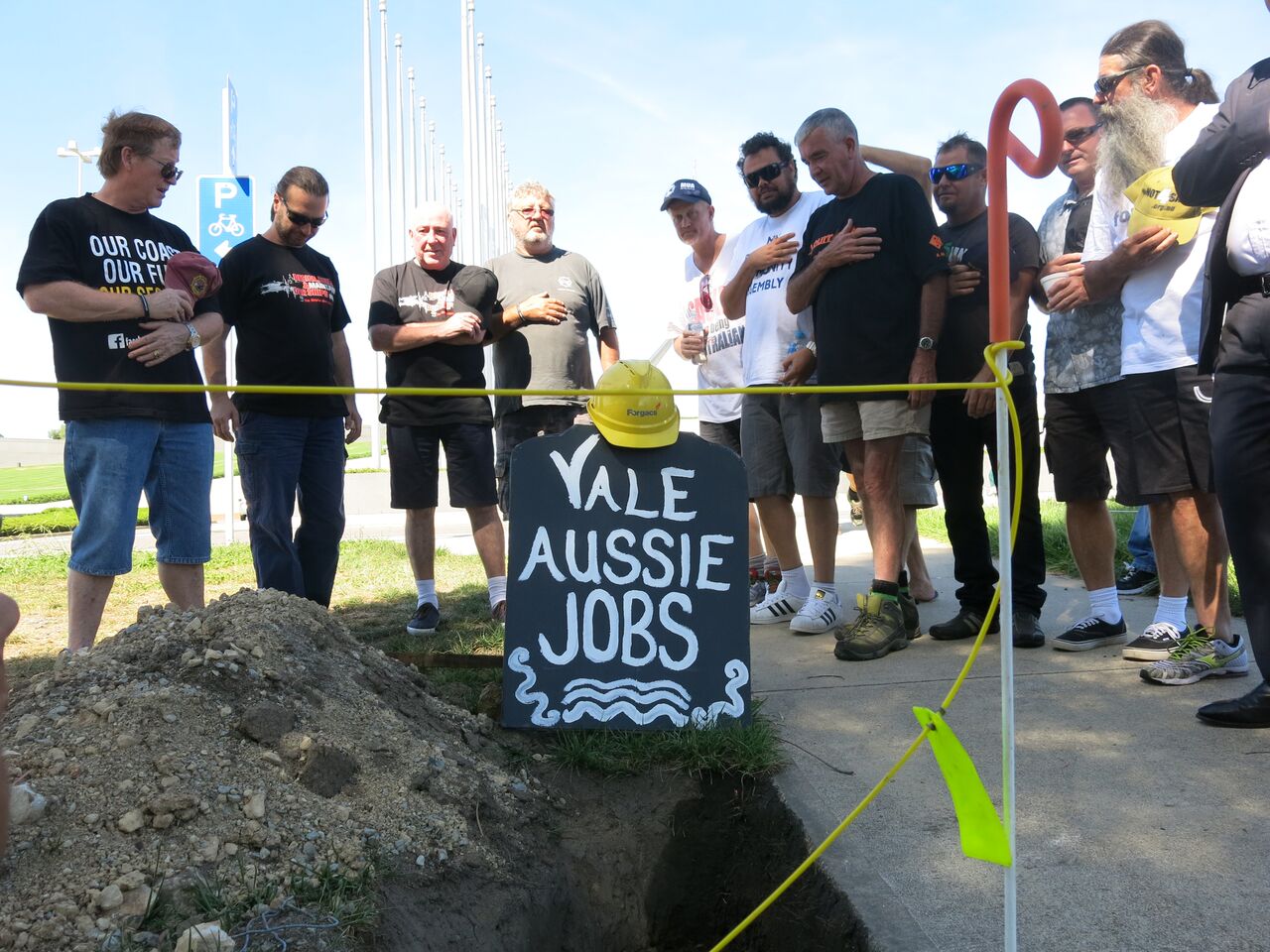