The Prime Minister’s $39 billion promise for future shipbuilding in Adelaide has not prevented a fresh wave of job losses as his Government has acted too late to stop the present plunge into the valley of death.

Another 100 jobs will go by next month at BAE in Williamstown and 26 sub-contractor workers at ASC in Adelaide were dismissed this week, mostly via phone calls.

They join hundreds of shipbuilders now without work as shipyards in eastern Australia  start to run down due to a lack of new government orders.

“So far there’s been no solid timeframe for the new frigates and patrol boats – is this just another promise Tony Abbott will break?” SA Assistant Secretary Colin Fenney said.

This week an AMWU delegation met MPs in Canberra to demand proper detail on Mr Abbott’s embrace of a rolling build and to press for jobs to be saved now as an emergency priority  by bringing forward the offshore Pacific patrol boat program earlier than 2018. 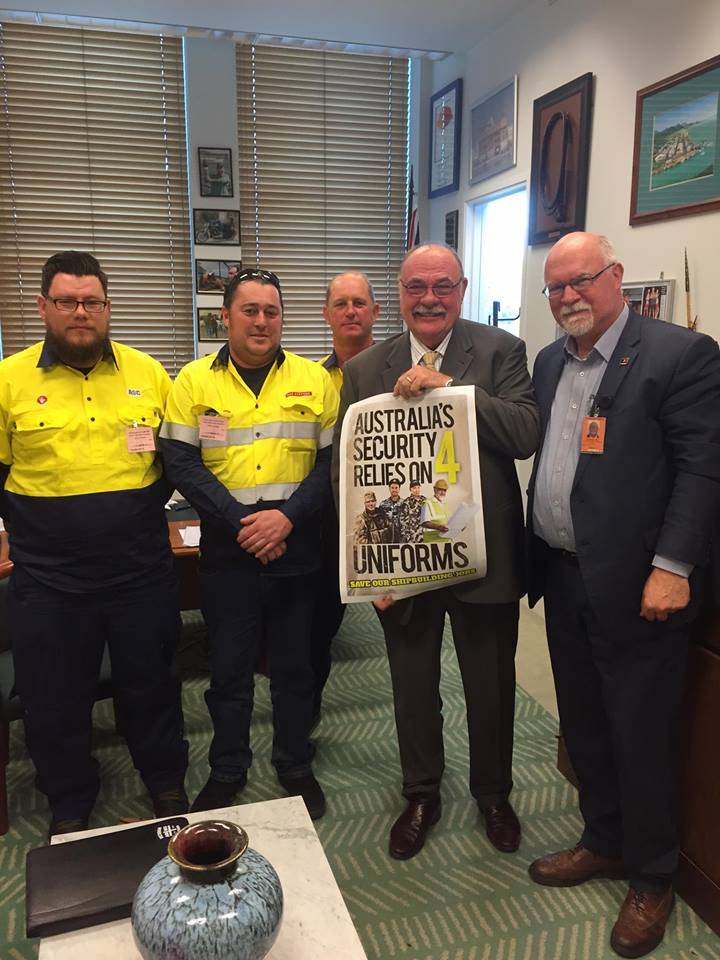 Three teams of AMWU members and officials quizzed over 30 Coalition and crossbench MPs on whether the PM’s announcement of a rolling build of surface warships from 2018 would save any shipyards jobs beyond Adelaide – in the NSW Hunter, Victoria and Perth.

The responses from Liberal Cabinet Ministers and MPs ranged from the defiant (“you should be thanking us”) to conciliatory, as shipbuilding looms as a massive Coalition vote-loser.

They also urged MPs to send the Abbott Government back to the drawing board on overseas builds for two navy supply ships and the Australian Antarctic Division’s next icebreaker.

BAE Systems delegate Leon White said: “ASC Adelaide can’t build and maintain frigates and patrol boats alone, they will need other yards but unless this Government urgently brings extra work forward the jobs and skills at BAE Williamstown and Forgacs in NSW will be long gone.”

Glenn Thompson said it was disturbing that some Abbott Government ministers were still trying to back peddle on the solemn promise of former defence spokesman Senator David Johnston in the 2013 election campaign that 12 new  submarines would be built in Adelaide.

“One senior minister said to us that the position of their Shadow Defence Minister at that time was not the policy position of the Federal Coalition – we asked if he really thought voters are that gullible,” Mr Thompson said.

“We left the Government MPs in no doubt the electorate expects those submarines to be built in-country, we want more South Australian Coalition politicians make that demand as Senator Shaun Edwards already has.” 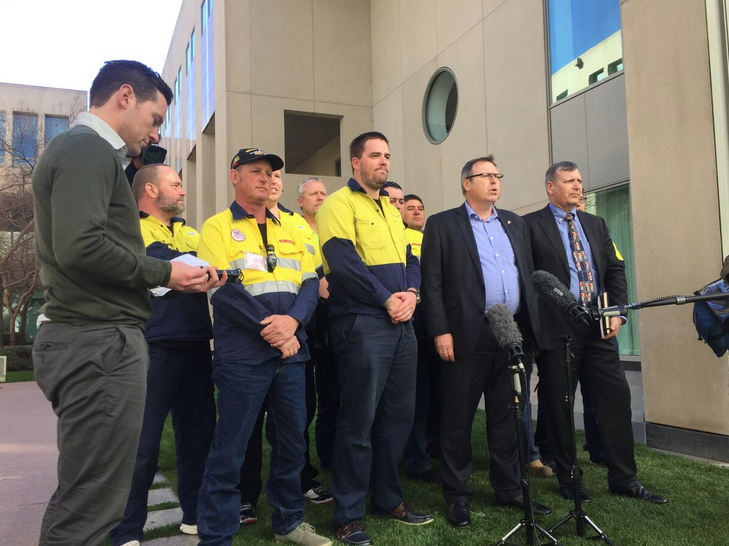 Meet the press: our shipbuilders, led by AMWU Assistant National Secretary Glenn Thompson, talk to the media on the Parliament House grounds.