Help us hit the target on future jobs

The vital message that constructing submarines in Australia means future jobs needs to be fired home at every opportunity and you can help it surface in the heart of the shipbuilding city of Adelaide. 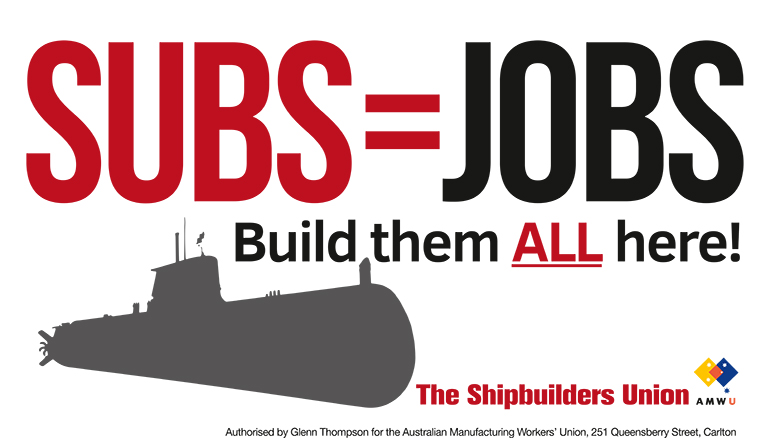 Your union is putting three big billboards, like the one pictured here, up in prime locations across the city and our members have the opportunity to help keep the heat on South Australian MPs in the Federal Government.

The AMWU is crowdfunding the cost of producing of the billboards then keeping them up, with the first due to be positioned in Rundle Mall next week.

We launched our social media campaign last week at www.gofundme.com/subs-jobs .

With ASC Submarines members such as fitter and turner Matt Primiero backing it, we already have raised $4267.

“I love my job, but thanks to the Government's plans to send the new submarine build offshore, I could soon lose it, ” Matt said.

The other two billboards will sit above busy traffic spots in the key federal electorate of Hindmarsh with the more funding pledges we get on social media meaning the longer we can keep them up.

This week ASC announced 45 redundancies among the workforce at its Osborne facility, the first of its permanent employees to be put off as work winds down on the Air Warfare Destroyer project.

Unless the Government moves faster to outline in detail its decision to build new frigates and Pacific Patrol Vessels in Australia, more redundancies are likely across the industry.

Within weeks the Government is due to bring down a major Defence White Paper, which is expected to recommend whether the original promised 12 submarines will be built here.

The AMWU believes we must send a forceful message that all 12 submarines must be built in Adelaide, as the Coalition promised before the 2013 election, and to ensure the number is not reduced to eight as has recently been leaked to the media.

The union’s aim is to raise over $5000, which will help us to pay for displaying three billboards and give members a chance to lend their voice directly to this campaign.

“These billboards are a forceful reminder to Coalition MPs that any idea of cutting the number of submarines to eight is totally unacceptable,” said AMWU Assistant National secretary Glenn Thompson.

“And they are a reminder to the people of Adelaide of their right to the shipbuilding jobs that the Coalition promised them; jobs that are now being lost due to Federal Government inaction.”

Syndicates from Germany, France and Japan are competing for the right to build the submarines, which is expected to be Australia’s largest defence project in its history.

Mr Thompson said there was no justification for an overseas or hybrid build (partly offshore).

“All three countries are on record as being prepared to build in Australia, so PM Turnbull must abandon any other option,” Mr Thompson said.