Sacked AMWU brewery members had a huge victory this week when the labour hire firm providing non-union workers which took their jobs withdrew from the CUB Abbotsford plant due to its inability to work with the management.

Programmed Maintenance threw in the towel after 11 weeks of failure after its fill-in fitters failed to raise beer production above a third of normal, leaving it facing millions of dollars in losses and legal action from the upset management of CUB.

That leaves CUB, which hired Programmed to reduce maintenance wages by up to 65 per cent, struggling to find a new contractor or with the only sensible choice - re-employ the sacked 55 maintenance experts on their previous pay and conditions.

AMWU Victorian State Secretary Steve Dargavel said CUB was now isolated after being publicly exposed as the puppetmaster behind the whole strategy.

“Programmed tendered for and won the CUB contract on the lowest labour costs but hasn’t been able to perform and they leave CUB in disarray,” Mr Dargavel said.

“We expect CUB to sue Programmed. Labour hire contractors should take note, they face losing millions of dollars if they put themselves in a position of undercutting the wages and conditions of workers.”

Mr Dargavel said the AMWU and ETU had won an important battle, but the dispute with CUB goes on and it’s essential that we keep donations flowing to sustain the effort for our sacked members. CLICK HERE TO GIVE

You can support them by joining the fitters and electricians when unions march on the Victorian State Parliament next Thursday in a massive protest against the multinational brewer. 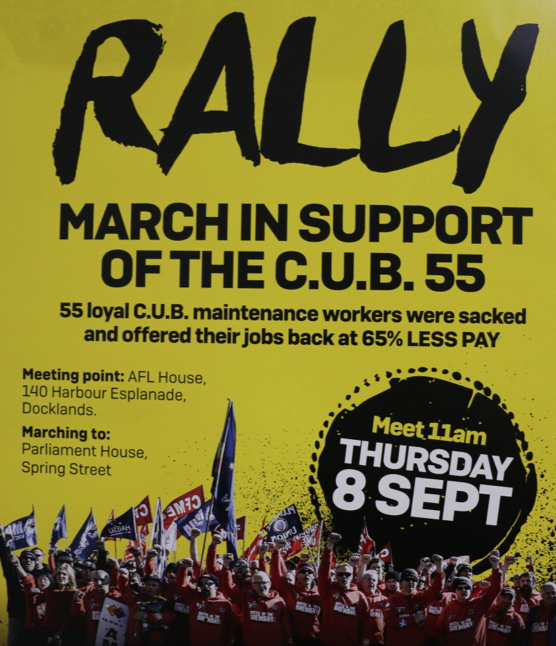 Programmed’s  withdrawal came a day after the industrial agreement it used at CUB and tried to impose on the 55 AMWU and ETU members was exposed as a sham by ABC radio’s Background Briefing.

The Western Australian agreement from a few years ago was signed by only three casuals, one who said he did not understand what it was and only worked for the contractor for six days.

ETU officials said they had met with cross-benchers in Canberra this week, who would support a parliamentary inquiry into corporate "gaming" of the Fair Work Act.

ACTU Secretary Dave Oliver, at the weekly rally outside CUB, said the 55 had the movement's total support and hit out at the Turnbull Government masquerading as "the worker's friend" while introducing a raft of anti-union legislation to Parliament.

“It’s hard to see CUB being able to get any other labour hire company to fight this battle for them, no contractor in their right mind would touch them,” Mr Brown said.

“CUB are out of options, but we know it’s not the end of this dispute, just one win.”

Right on cue: union straight shooters enjoy one of the many facilities at our community camp outside CUB. 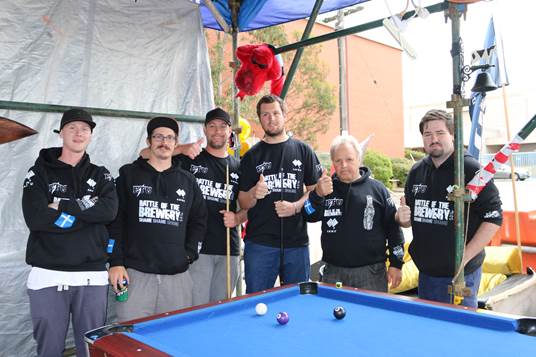